Anyone buy a new bow this year?

Hey guys! Anyone buy a new bow this year?

No. On purpose I stay away from Pro Shops. Last time in one I put my hands on a Bowtech RPM 360. Felt so good. Walked out the door with it.
New ones now a days are way too nice. Im alot smarter than I look. 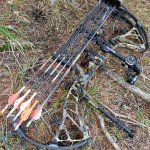 It has not been 10 years since I got the last one. lol

General rule of thumb for me.

I might splurge for a different release this year. Not 100% on that either.
Reactions: okie archer and Maxhunter

Although it would be nice to buy a new one, my answer negative. Last new bow purchased was 2017.

I have strongly considered a new one over the past year. I really like some of the new Hoyt models but they are more than I want to spend. I'll probably stick with my 13 year old bow that still seems to get the job done if I do my part.
Reactions: okie archer

The last bow that I purchased was 25 years ago and while it is heaver than the newer ones it still works quite well when I pull it out and send some arrows down to the targets.

But then again I haven't bow hunted in 6 years.
H

I bought a used hoyt rx1 carbon ultra 2 months ago, new to me. Its a shooter.

I bought a Matthews Triax last year. First new bow in 10 years. Always shot a bowtech, but instantly wanted this once it was in my hand. Wasn’t even looking to buy a new one. Dam bow salesman!

I ordered a Bowtech Revolt X the other day. First new bow I've bought in 10 years. Well....actually first new bow I've ever bought. Always bought used before. I'm looking forward to getting it.

I'm looking to buy one soon. Entry level. Looking at the Hoyt Torrex. Complete package from Scheels is looking at around $700
Reactions: Maxhunter

Actually got one yesterday! I went with the Mission MXR in the original Realtree. First bow, and I shot a Hoyt and Bear along with it, and for the money, I couldn't tell the difference between the Hoyt and the Mission. Set it at 60# and shot about 40 arrows all in before I started getting a little fatigued. Really excited to set up a target in the backyard and start shooting every day!
O

Last new bow i bought was in 2009. I bought a leftover 2008 Bowtech 82 airborne. I have killed 3 Black Bears, a Pronghorn, several Whitetail including a couple P&Y, a few turkeys, coyotes, bobcats, grouse, ducks. It does the job. Although I do admit I would like a new one. I have hunted 12 seasons with it. I want to at least hold out and use it for 15 seasons then maybe I will upgrade.
Right now my gear priorities include a good spotter and a good scope. Leaning hard toward Leupold on both of them so I dont think a new bow is in the plans right now.

We lost our home in a Northern California wildfire last year and I lost all of my hunting gear. I would have hunted with my Mathews Creed for 5 more years since I hate New bows if the old one is still doing what it's supposed to. I bought a new Mathews V3 and can't say enough good things about it! I would have never spent that kind of money if not for my homeowners insurance.
You must log in or register to reply here.
Share:
Facebook Twitter Reddit Pinterest Tumblr WhatsApp Email Link
Top Bottom