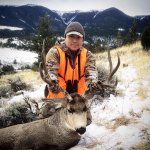 Utah general season muzzleloader buck. Shot him last week. Congrats to all who have posted and good luck to those still hunting!

My non-hunting brothers first buck, from OR. Antlerless tag with a one deer limit, I think I spoiled him.

yea you spoiled him geesh, what a nice buck. feel free to pm me a general local, and what hunt he put in for haha.
T

Travisitguy said:
yea you spoiled him geesh, what a nice buck. feel free to pm me a general local, and what hunt he put in for haha.
Click to expand...

PM will be sent.

Last day of second rifle here in Colorado. More meat for the freezer!

Great buck! Have a good story to go with it??

Got out today and found this guy on some public land. Gross was 187 1/4. My best buck yet!

Congrats JJ; that buck is built like an Eland!

SE Montana was produced a great buck for me this year, he is a tad shy of 170". His neck measured 28" at the swell and weighed a ton! This dude was huge and by far the largest deer I have seen in my short 2 years of hunting the area. Glassed him in a hay meadow and stalked in for a while on his way back to his bed which was in the badlands. Finally got in front of him with the wind in my face so I could close the distance. He went down into the draws to bed, I waited for a while hoping he would stand or move. Patience is not my virtue so I slowly made my way to the rim. The wind blew my scent down to where I thought he was and lucky me he stood up just long enough for me to shoot. It was a quick ethical kill, which always makes me smile but he got one last move on me by dying in the steepest/nastiest draw in the badlands. Had to quarter him up and pack him out, luckily I was able to drive about 300 yards from the top of the draw.

jjenness said:
Got out today and found this guy on some public land. Gross was 187 1/4. My best buck yet!

....And you only leave us with a side profile mug shot? I'm having issues trying to figure out where some points start from. That buck deserves a full on facial.
W

Nice job JJ. You are having a good year.

Awesome buck Jesse! I would shoot a buck like this every year.

I killed this buck last Friday during Colorado's second rifle season. I jumped him up on opening day pretty high on the mountain, about 11,300. I didn't shoot because I saw he had a very short G4 on the left side, I stared a little to long through the binoculars before I realized he was a stud even if his G4 was short. He ran off before I got together enough to realize I should shoot. I looked for him the next two days but couldn't find him. I decided to let the area rest for a couple of days and hunted a some different areas until Friday morning. I was about 3 miles in and just about to call it a morning and head back to the truck to warm up when I took one more look in the drainage I had seen him in on opening day. Through the fog and snow I could make out a deer that looked really nice, so with new motivation I started closing the distance. It took me about an hour and a half to slowly close the gap, but due to the angle of the slope I had to back back out and come up on the opposite ridge so I could see him. I climbed up the steep, snowy ridge and peeked over the top, he was still feeding at 397 yards. I practice a great deal at 500 - 600 yards and felt confident of a 400 yard shot on a deer. I tried to get set up, but he was slowly moving towards some timber and my angle was bad, while I was repositioning I managed to get my scope covered with snow. I got set up and did my best to clean the scope with my finger. I felt good about the shot, but he just ran about 30 feet and stopped. My second shot dropped him in his tracks and he rolled halfway to where I was. No ground shrinkage, back tines almost 19" tall, 12" + forks, gross score just short of 190.