Broadheads, the only part that matters

I took my first animal with a bow and arrow 46 years ago and was hooked ever since. During that time, my focus and fascination has always been on the only part of our gear actually responsible for killing the animal. Broadheads have been my passion for almost 5 decades.

We are a few days from the ATA and like every year, there will be broadheads unveiled claiming to be a new idea and rarely is that the case.

What most dont know is that the first commercially available (and print advertised) broadhead was the 1878 Peck and Snyder.

As I traveled over the years and picked up broadheads and other collectibles everywhere I stopped, one of the items I collected was a very old arrow with an Indian trader point and carved horn nock. Little did I know how important this old broadhead was.

Or that the first mechanical broadhead was the sold in 1950's. There is debate about the first replaceable blade broadead. Wasp claims to be the first But the Fred Bear Razorhead had a replacable bleeder blades in the early 1950's (more on that)

And the Little Shaver utilized shaving razor blades that could be inserted into the broadheads as the main blade and the blades replaced as needed. 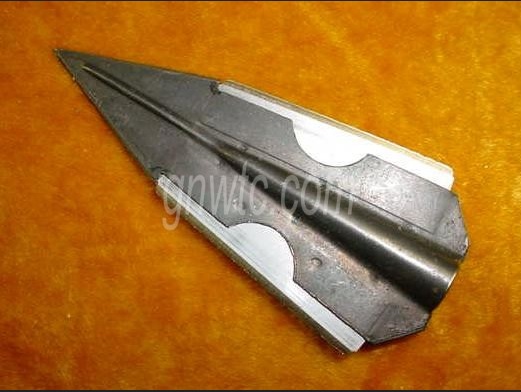 Ive collected broadheads from the beginning of my love of bowhunting and started hunting with the Bear Razorhead lists Edward J. Henckle as the inventor. Link to PDF of that patent below.

I have more of the bear heands than any other head in my collection. Here are some of them not mounted on arrows. 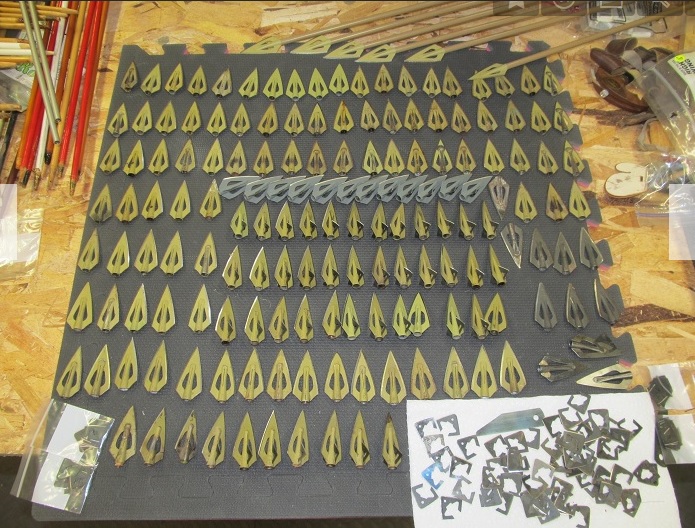 Unless you collect, you wont understand the significance of these which are some of the earliest and can be identified by the blade vent and the not yet flattened connection point where the ferrule meets the blade. I only have 3 of them. 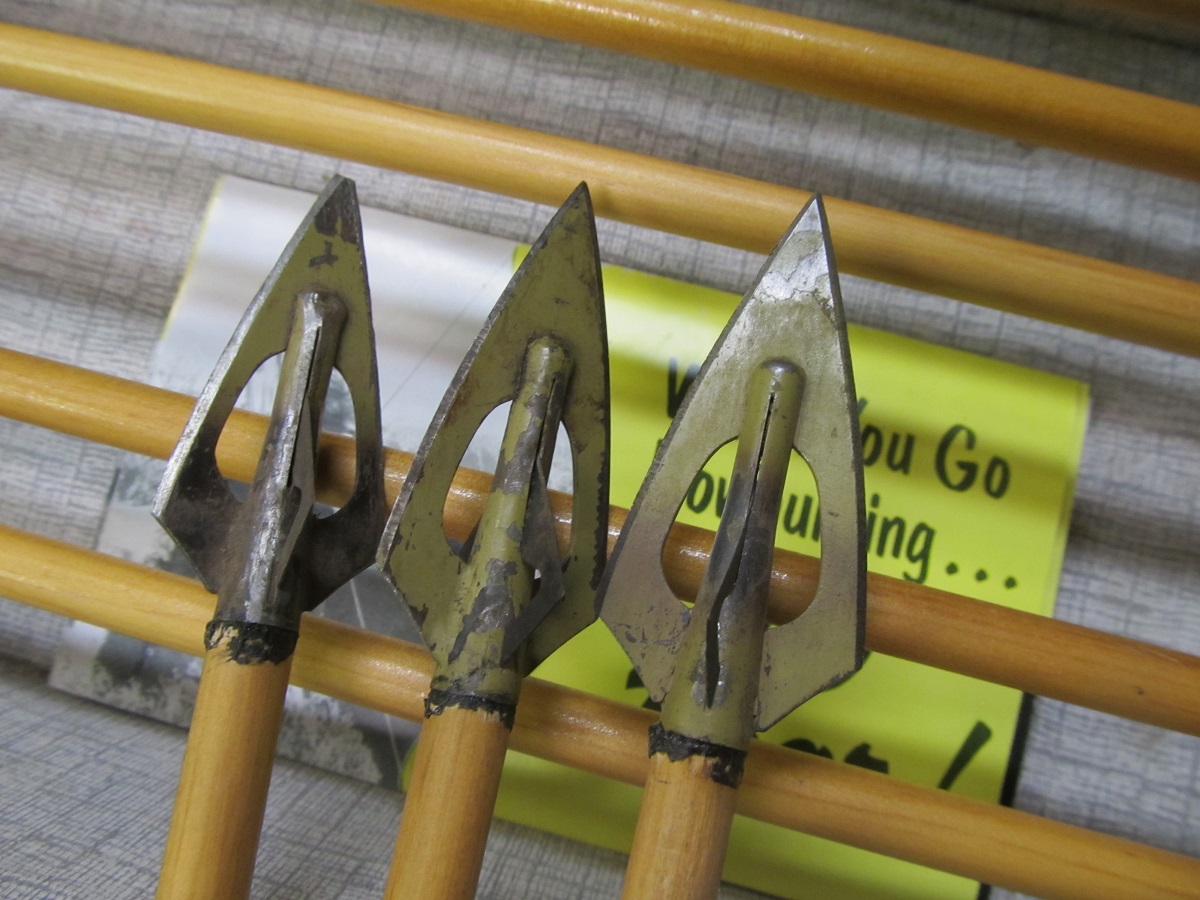 And still more that need some attention. In that mess you can see a couple more blade vent varsions and the flattened joint at the front of the ferrule. 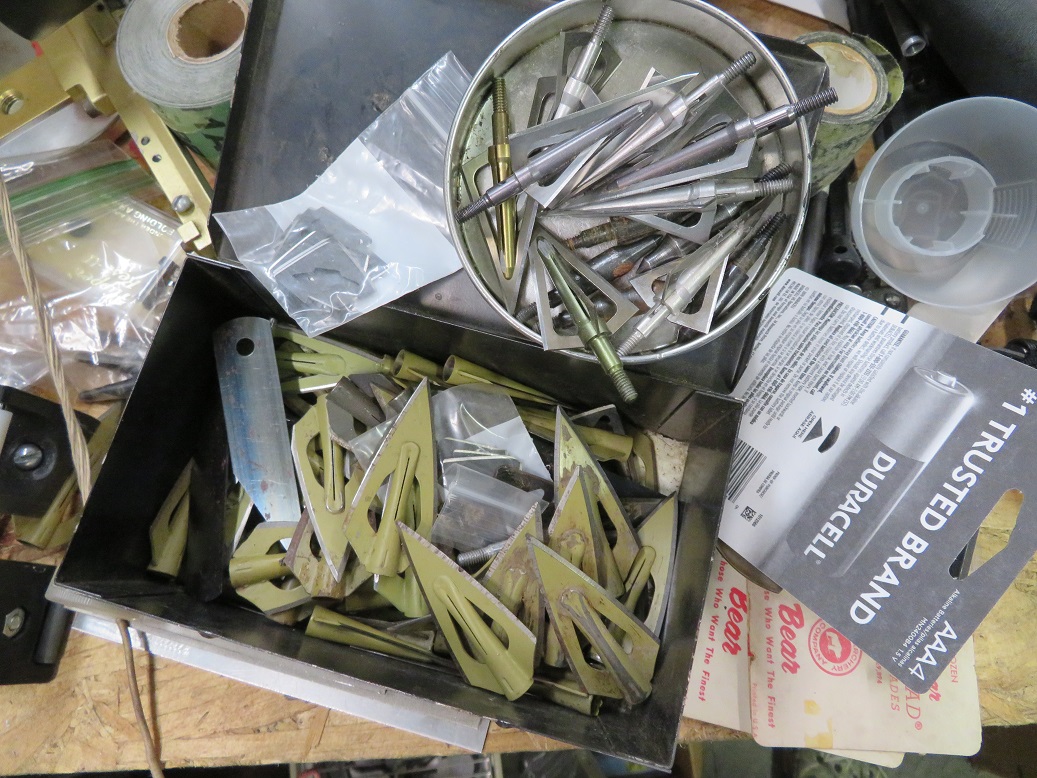 As time allows, I build cases to hold and display my heads but I need to build several more such display cases. Only one of each specific head goes in a case but I have many multiples of many of the heads, in some cases, dozens of a specific head. 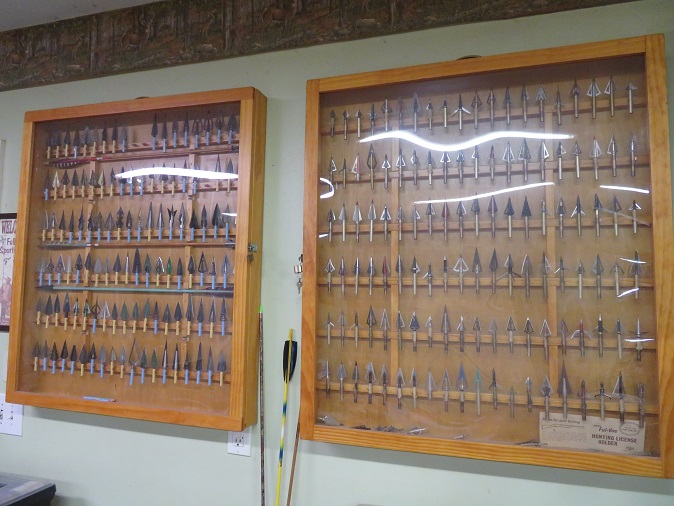 Some of my most treasured heads are the 1930's Roy Case heads since he was the first broadhead collector, The person responsible for the first archery deer season, is also from Wisconsin and was responsible for the Wisconsin Bowhunters Association (the nations oldest and largest state bowhunting org and because I sit on the board of the Wisconsin Bowhunting heritage Foundation Museum and Roy's son Caleb was on our board until his recent passing.)

Roy would sell you 10 of his heads for a dollar. 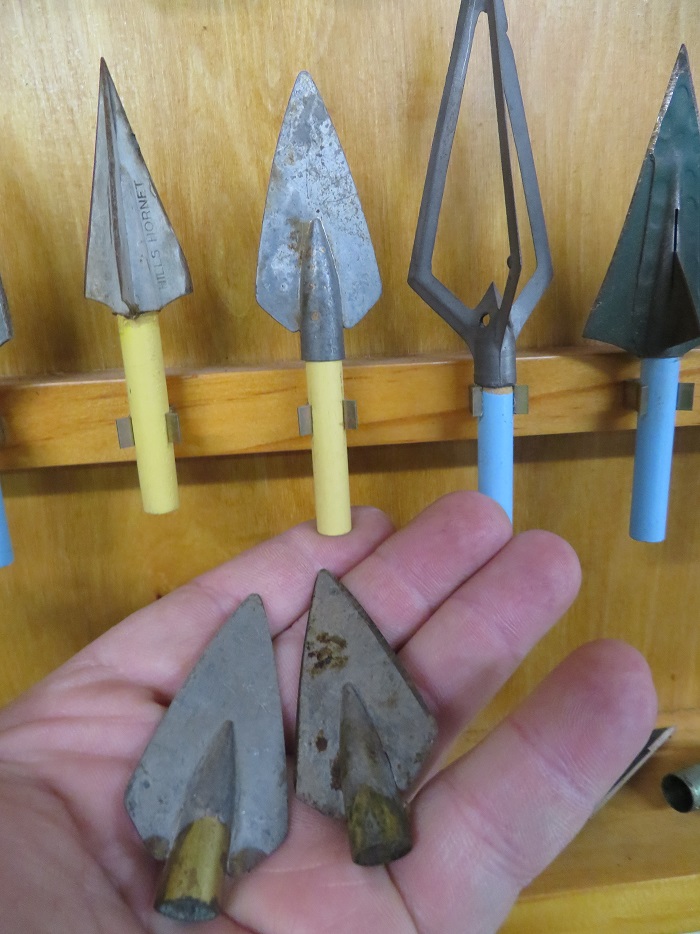 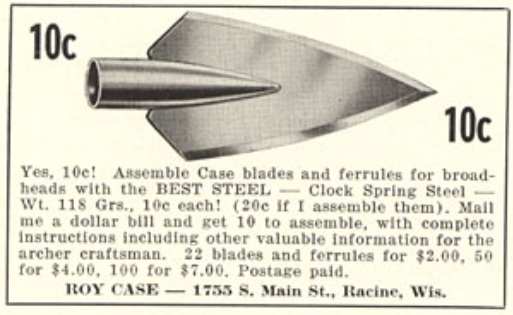 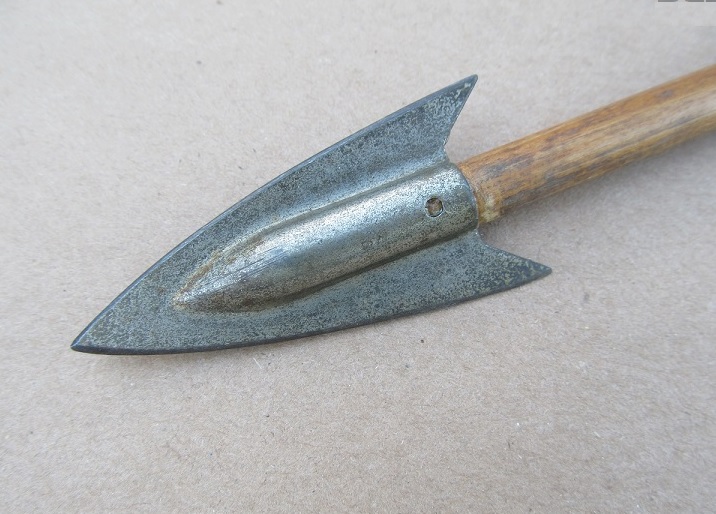 Some MA3 and Whiffen Bodkins (Both are Wisconsin made broadheads) 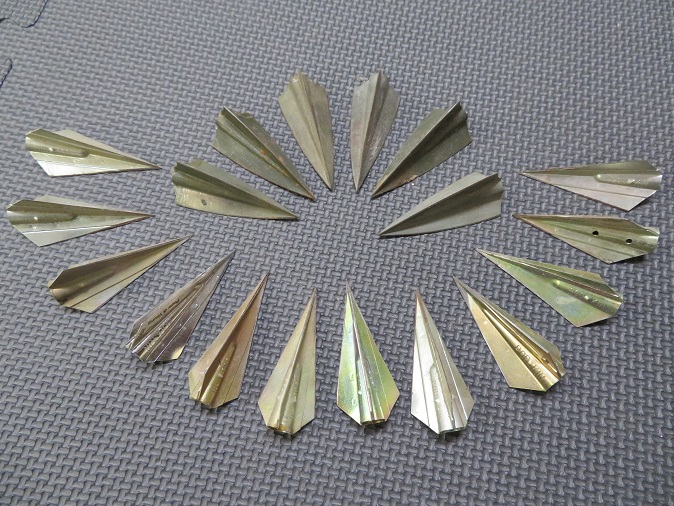 Wisconsin and then Michigan were the real birth places of mass produced broadheads and while this case is not currently up to date, it does show many of the early WI broadheads. This display case is maintained by us at the WBHF museum. 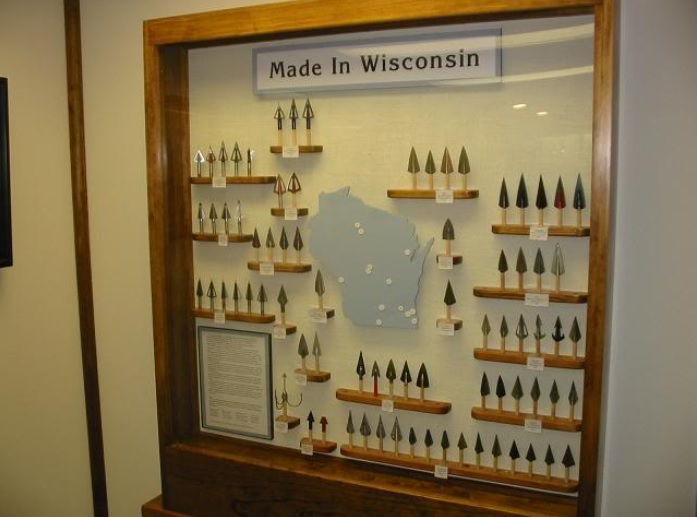 In fact we catalog many many heads there. This in only one side of a couple multi sided rolling cases full of broadheads. 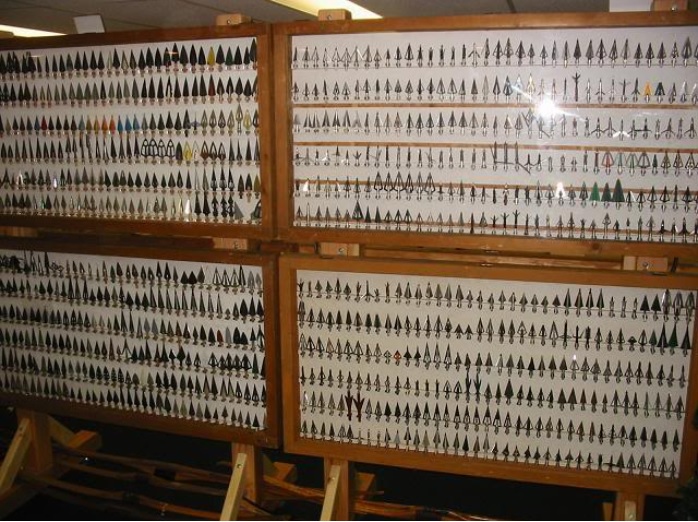 My broadhead hobby became more than that several years ago and because of my line of work I began acquiring pretty much every new broadhead I learned of out of necessity. That lead to broadhead testing and evaluations and many years of running the Ultimate broadhead challenge in conjunction with the Nation's oldest and largest broadhead shoot run by the Wisconsin Bowhunters association.

I dont know why but I still hold onto many of the thick wooden targets I made for this event. Bowhunters were challenged to shot their broadhead tipped arrows through the 3 inch hole at 40 and more yards. Those that did not, removed the arrow shaft and signed their name next to their broadhead. 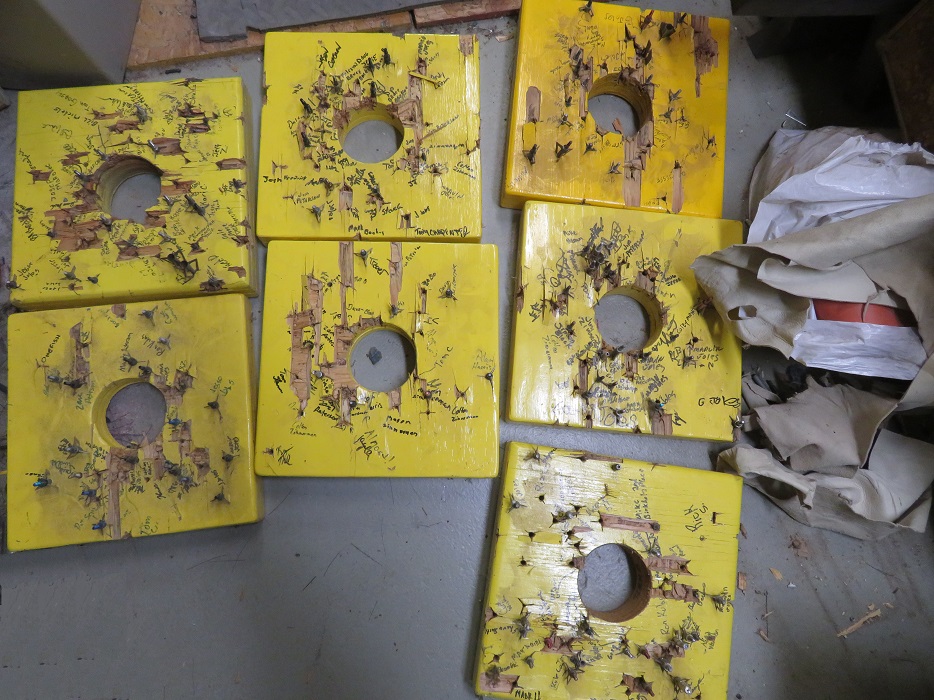 Over the summer I sold a few hundred duplicate heads I no longer needed and this weekend I spent some time in the shop locating and boxing up some of the heads. Every time I moved a box, I found another. This includes some prototype and production heads from broadhead makers I work with. 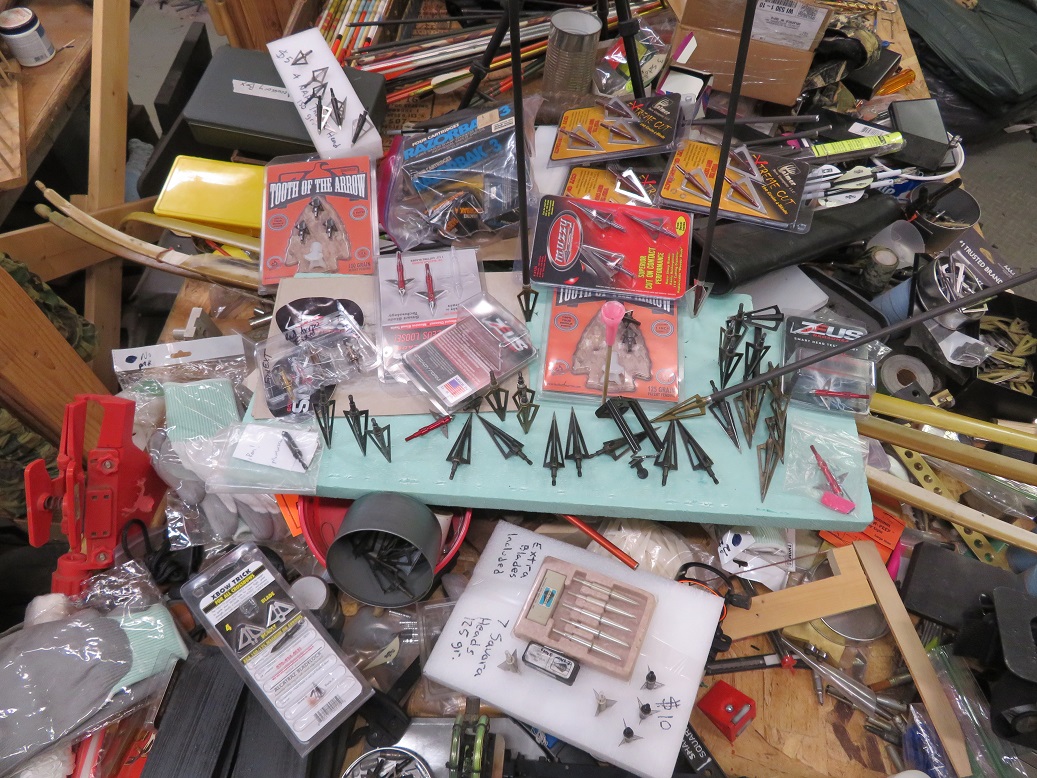 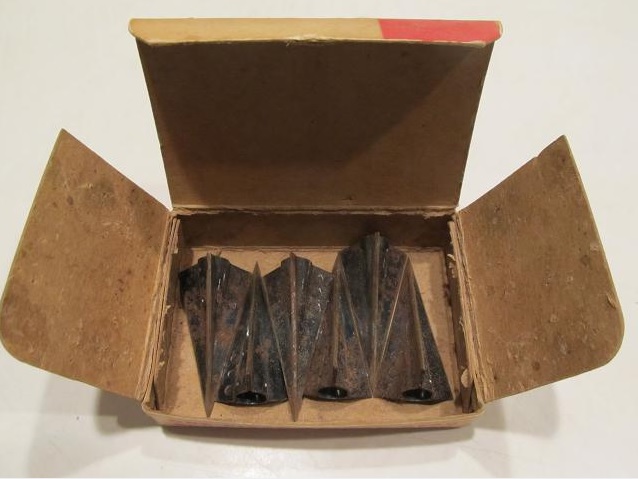 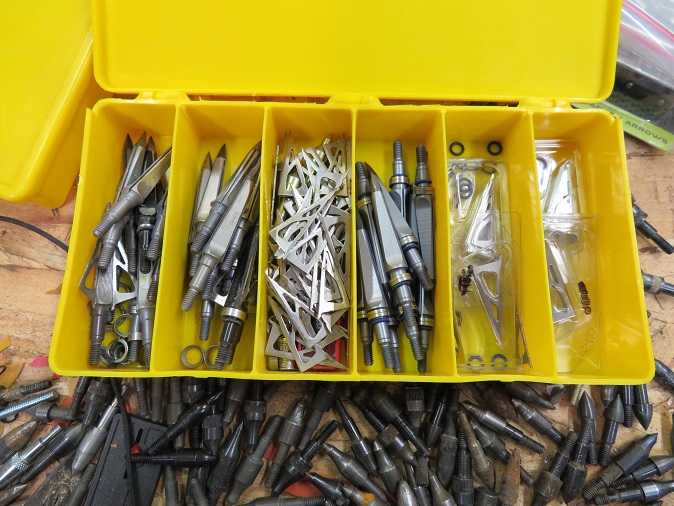 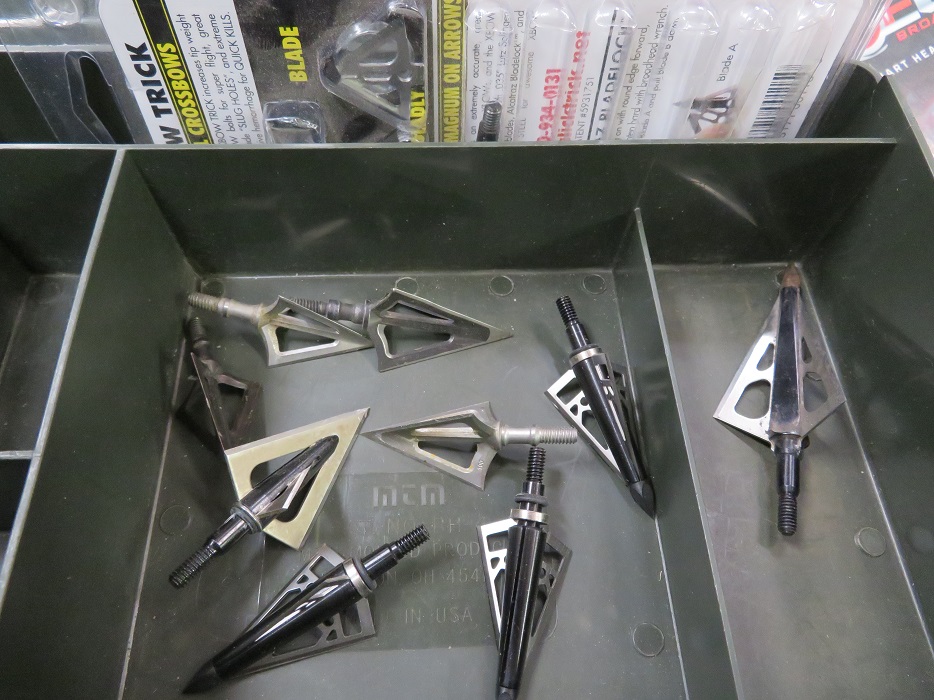 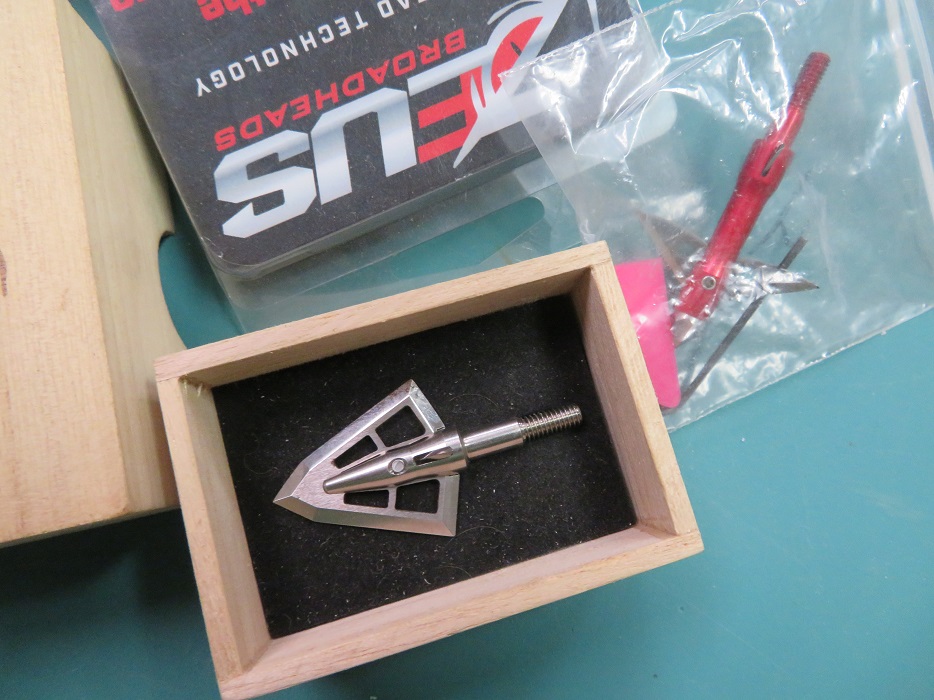 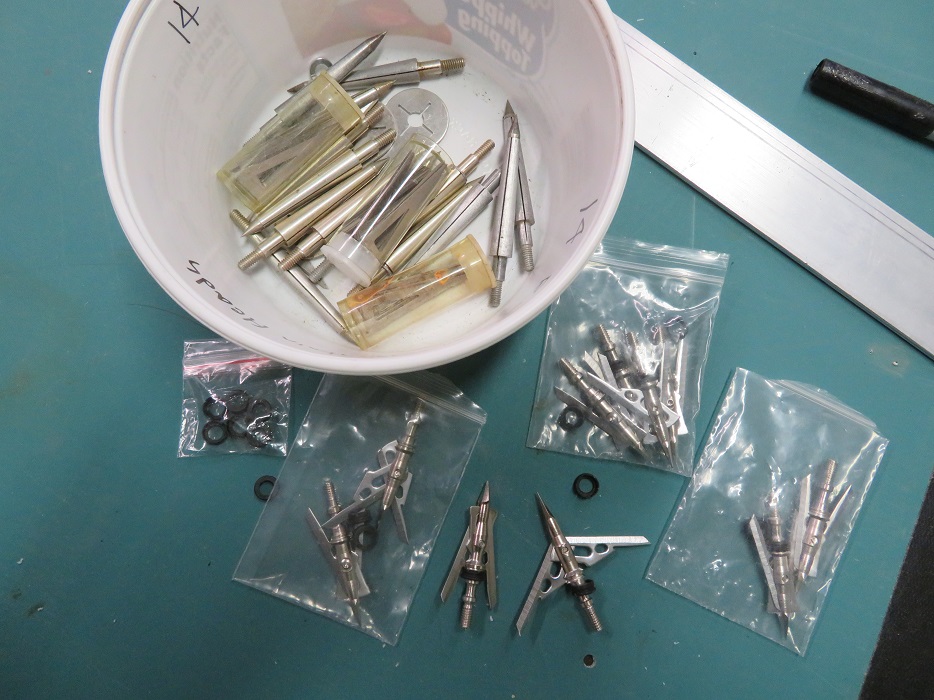 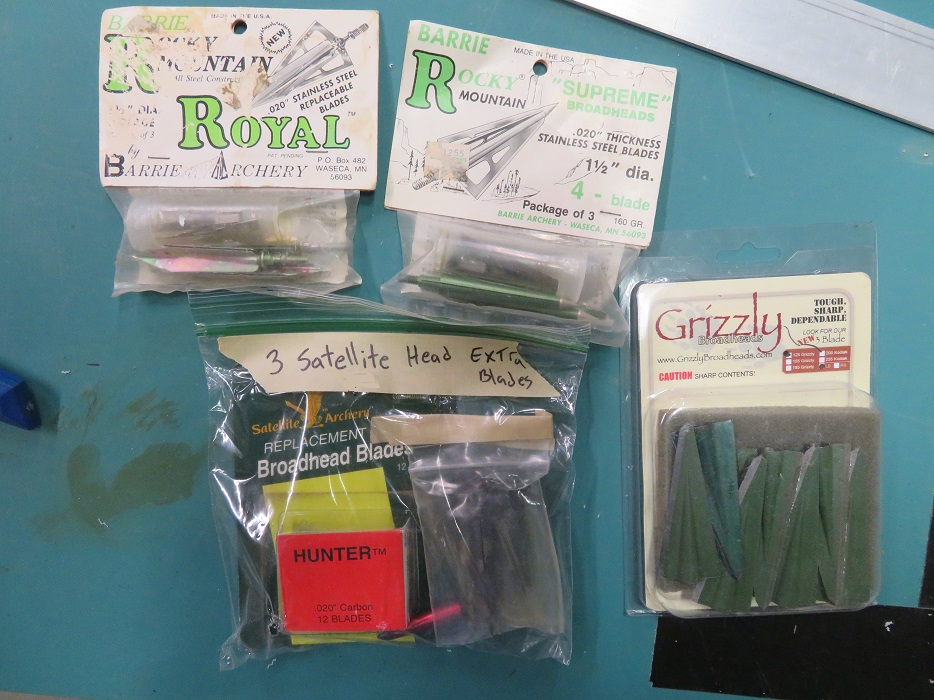 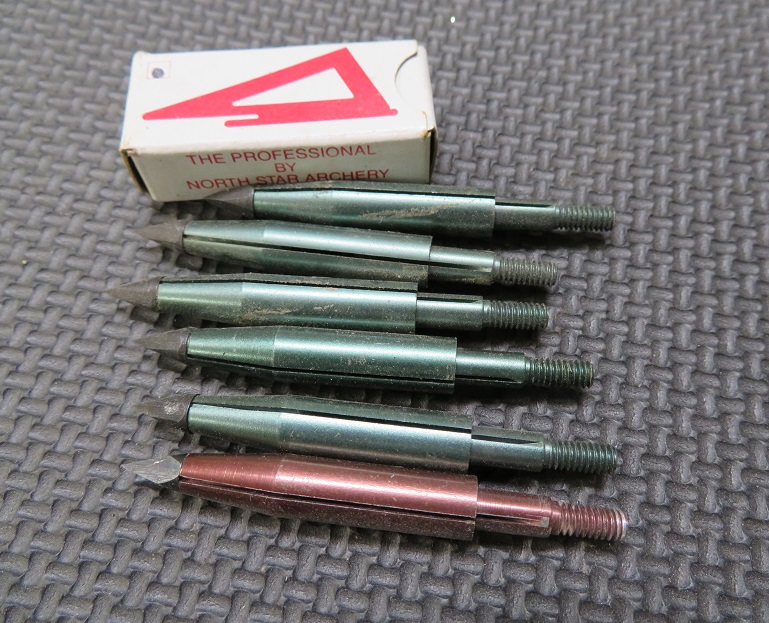 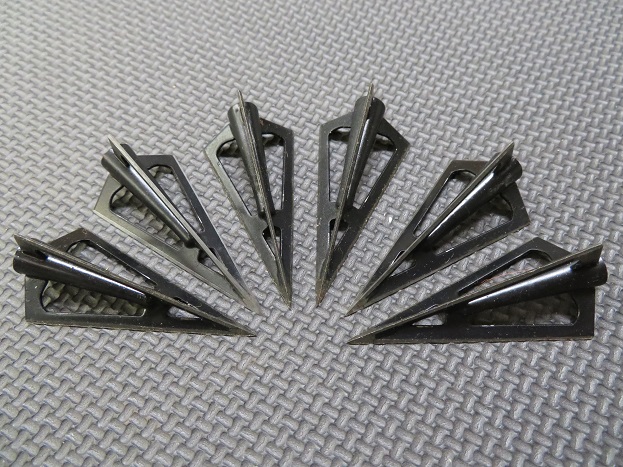 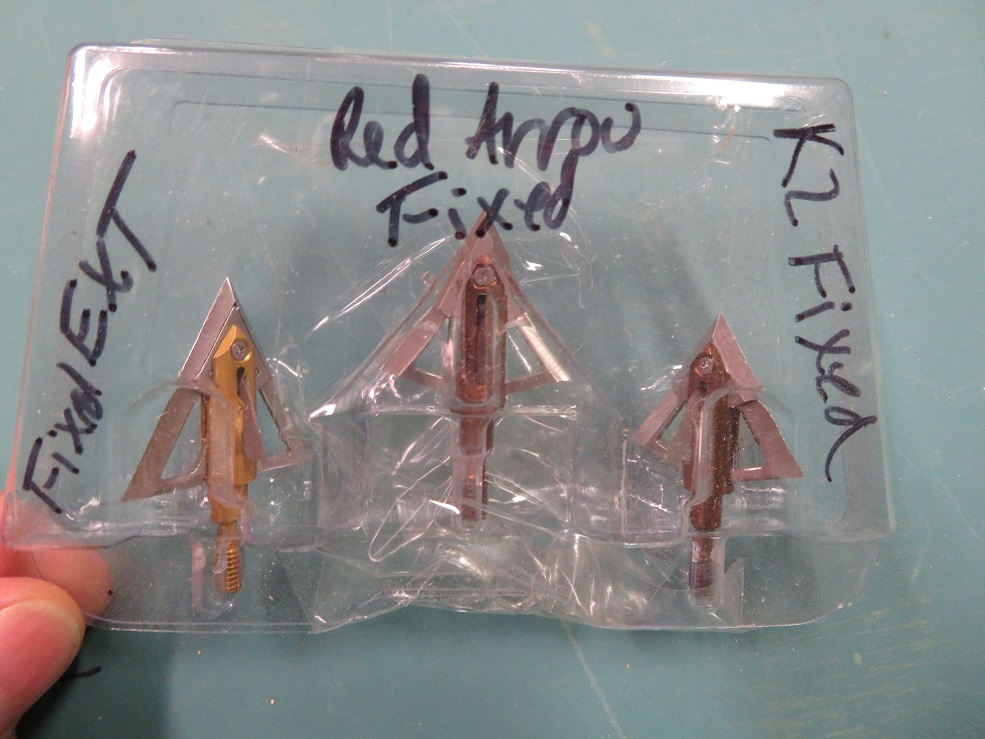 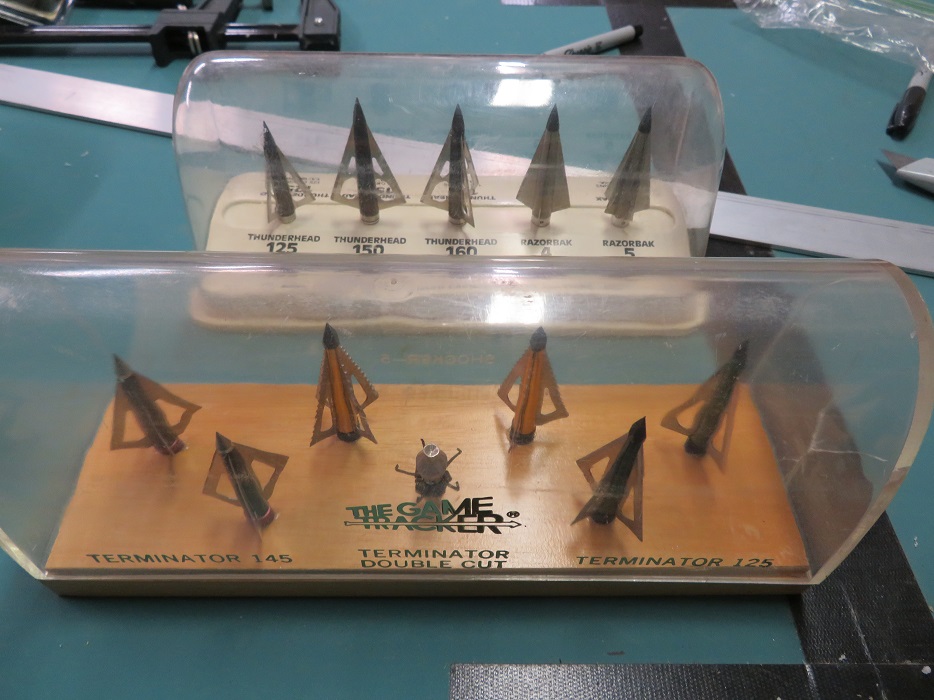 I killed a lot of deer with the Slick Tricks. 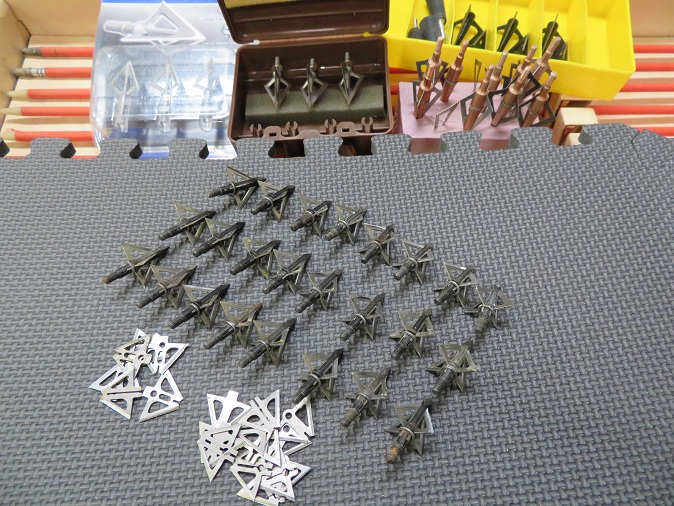 And literally tons of animals with the 250 grain woodsman over the last 2 years. 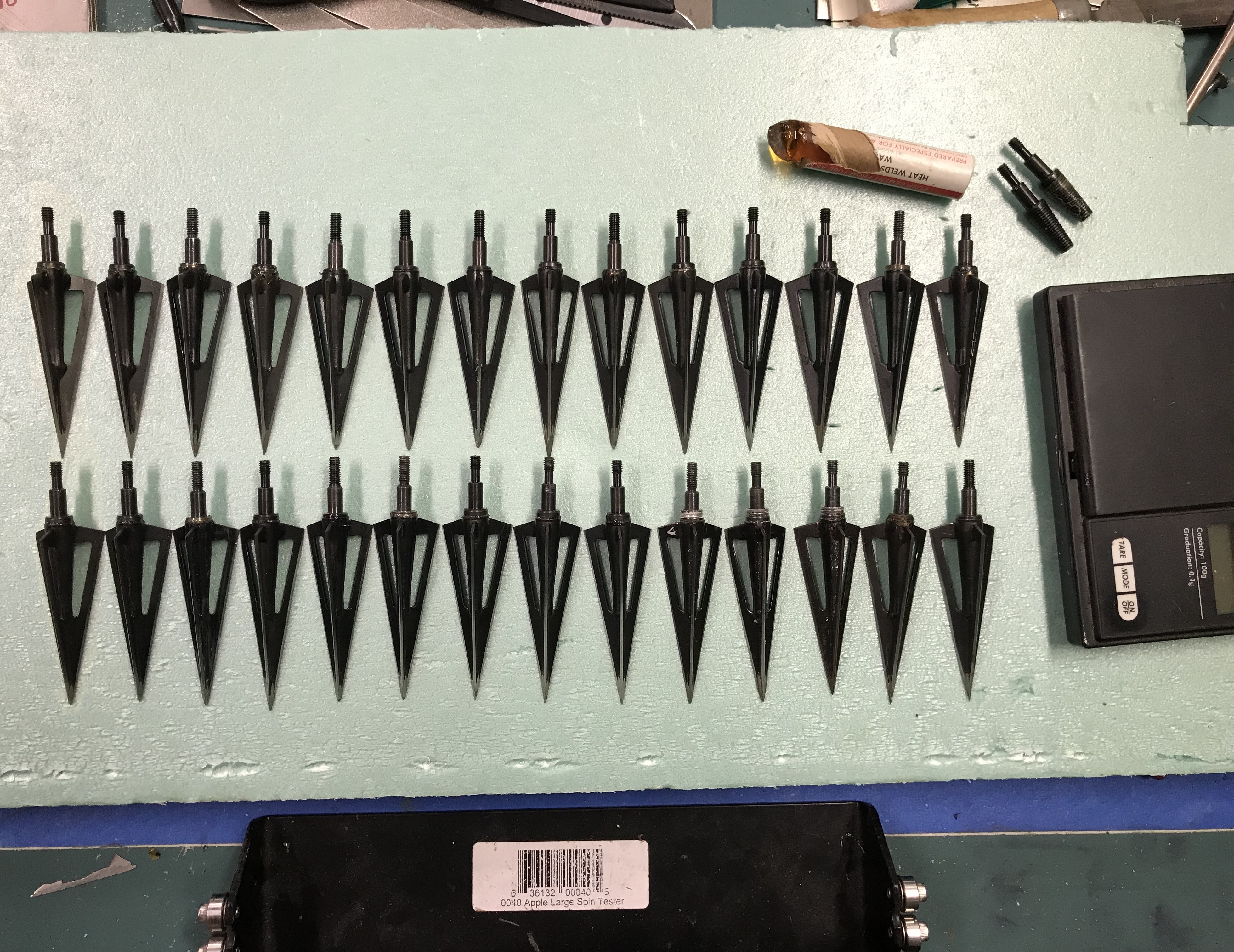 Another 250 grain favorite of mine for large and dangerous game. 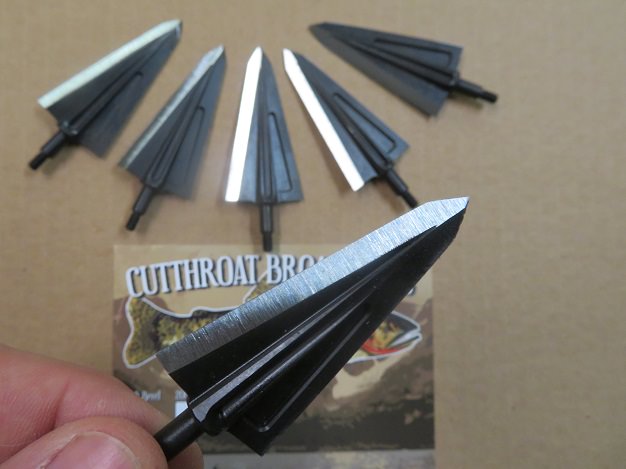 You may recognize many of the heads and some you have never seen before as they are my own, homemade heads that I hunt with and have taken deer and bear with. The next 4 heads pictured. 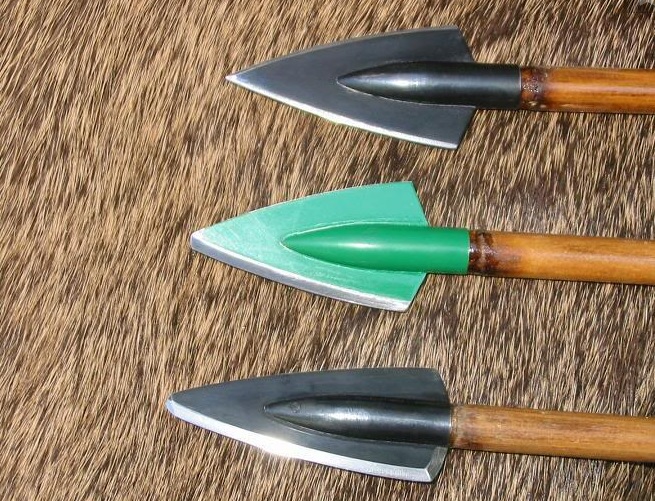 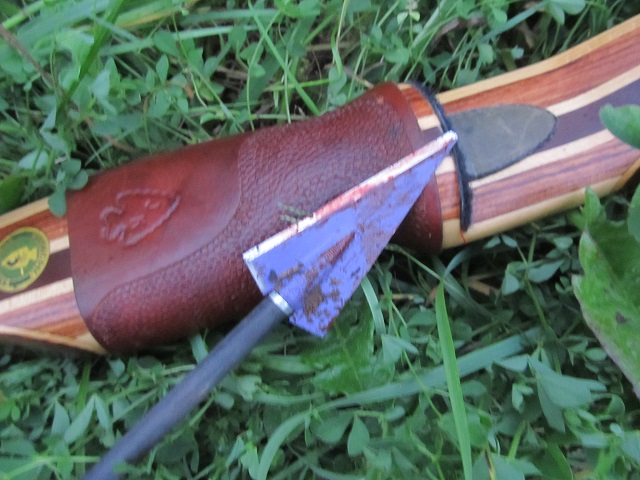 The ATA show next week will mean more heads that I need to acquire to stay current and most if not all will be a variation of a head that already exists since more than 3000 different heads have come to market since the Peck and Snyder. many of the new companies wont be in business 5 years after their launch so I need to snap them up while they are available.

If your going to collect heads, you will want the ABCC Master list and the regular publication. 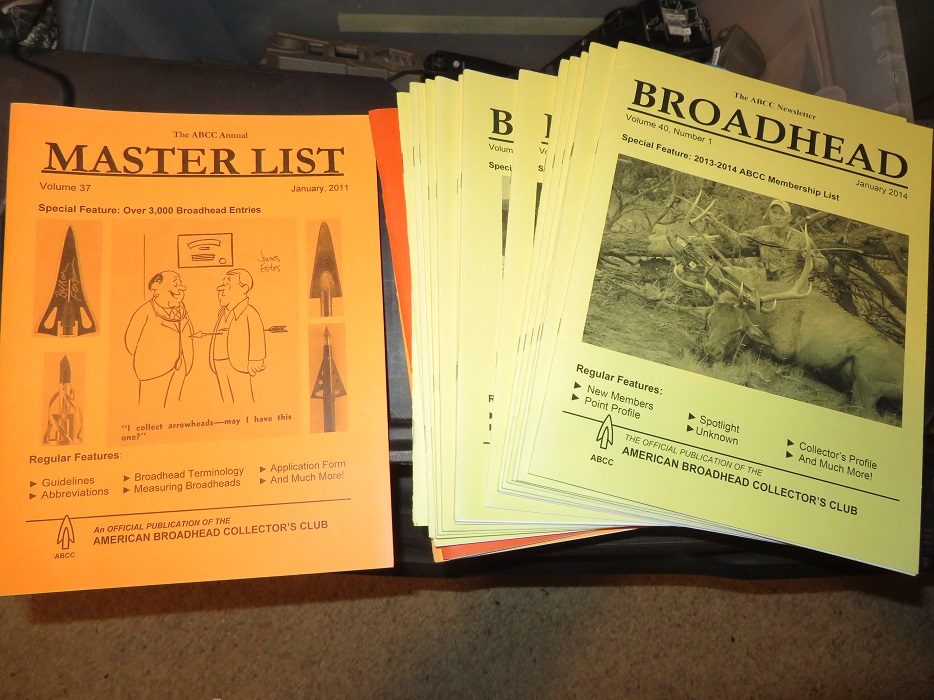 You... are absolutely amazing. Or insane. But either way, thanks for posting. This is really cool.

taskswap said:
You... are absolutely amazing. Or insane. But either way, thanks for posting. This is really cool.
Click to expand...

Einsten was a little of both. Thanks for posting

I still cant stop thinking about the gross cat litter box at that outfitters house that you posted about. lol

Thanks for posting this.
E

Very cool. Thanks for posting.
B

What a great thread of broadhead pics and info. We were just at the ATA show in Indy last week and saw some cool new heads that some of the companies are coming out with. Lots of designs over the years but it all boils down to whatever works in your setup, be that trad bow or modern!
You must log in or register to reply here.
Share:
Facebook Twitter Reddit Pinterest Tumblr WhatsApp Email Link
Top Bottom