Hunting has been a little rough but we hot one on Thursday and have 2 more days to find the second one.

All my pictures are on a camera and not my phone so you'll have to wait for them.

We've had temperatures from 31 up to 72. We had a downpour of rain Wednesday that caught us out in the open, so on went the rain gear to get back to the truck

Wife and I arrowed ours in January......hers in the snow. They sure are fun to chase.
Reactions: JimP and gonhunting247

Decided to have a little fun and ride this sand spider.

One more day and pig to go

Oh ,Oh Az. is rubbing off on you,next thing you'll be chasing sheep!Ha!,HA!

JimP; That's the biggest shed that I've ever seen. Did you find the other one?
Reactions: gonhunting247, JimP and Bonecollector

We are now done and sucking down a few cold ones.

One tag out of two went unfilled but we gave it 100%. It seams that when the cards are stacked against you there isn't anything that you can do.

This morning we had 8 javelina run across the wash right in front of us as we were headed up it. We were off to the races and as we topped the small ridge that they had gone over I spotted them going over the next one, so off we went. I got to the top of that hill fast enough that I figured that I would be able to see if they went over the next ridge as they usually do but didn't see a thing. So we hunted that draw for the next 3 hours, picking apart every piece of brush and rock in it. We then went over to the next draw where they could of gone and did the same thing and nothing. Even the snakes that were dened up didn't want to come out and play when it warmed up, but to their defense it was still in the low 60.

I'll get the pictures and story up in a couple of days. Monday is travel day. Up at 2am to get away by 3 and then a 15 hour drive home.
Reactions: go_deep, marcusvdk, mallardsx2 and 5 others

Our 2020 javelina hunt started out like all the others for the last 26 years. A very long drive down to either Oracle or Catalina Arizona but the last 10 or so were broken up with a stay at some friends down in Mesa, Arizona. There we caught up on old times and harvested a box full of oranges and grapefruits. It was Roy’s turn to drive so I was able to either sleep on the way down or keep him company.

Our hunt started on a Friday and we took to the washes on our ATV’s looking for tracks. The first wash usually held very few tracks but it has easy access to a few of our hunting areas that hold javelina. I was headed to an old familiar canyon where I have taken a number of them and Roy headed to an area further to the east. I took a hike into my canyon and did a lot of glassing, not finding anything other than some deer I headed down into the bottom of it to walk along the edge of the draw in the bottom. These little buggers like to live down in the bottoms and won’t move unless they are spooked out of it. I hiked this one canyon out and then into the one further to the south and did the same thing then to the next one. By this time I was a couple of miles away from the ATV’s and it was nearing lunch so I headed back through a prickly pear garden. By the time I got back to the ATV’s Bob who is a friend that goes out with us had a fire going and was getting ready to cook up some Chimi-Chungas or whatever wrapped in tinfoil and cooked over the coals. Roy soon showed up with the same type of results that I had so we sat down and had some lunch. For the afternoon we headed over into the wash to the west. Now for those of you that know javelina you know that they like to take naps around noon until later in the day and to get them to move you need to push them out of their beds in the cat claw and other thorny plants. Soon it was time to load up and head back to Bob’s for dinner and a good sleep for the next day.

Saturday we headed up into the second wash looking for tracks. There were a few other hunters and families out for the day so most of the tracks in the bottom were driven over and hard to tell old from new. Without seeing any we decided to take a hike and see what we could find. Roy took off to the east and I headed to the west with plans to meet at a confluence of two different washes for lunch where Bob would have a fire going getting ready to heat up some Chimi-Chungas over the hot coals. During my hike I thought that I had heard a shot and when I got to the meeting place Roy was there saying that he got off a shot but had missed. He said that he looked for blood but didn’t find any and that the javelina were scattered to the four winds. We followed the same procedure for our afternoon hikes with very little to report to each other.

Sunday was the same routine. But I headed to where Roy had been the first day since there were a couple of deep canyons to explore but in the end I came back empty handed. Roy on the other hand had jumped some more javelina and got a shot off. This time he drew blood and said that the javelina had humped up when he shot. We ate lunch and then went looking for blood and tracks. We looked for a couple of hours without finding any blood or dead javelina, I figured that the ravens would tell us where it was at around noon on Monday.

Monday was the same routine but different areas and different hikes. I again came up empty but you guessed it Roy got into them again and got a shot off with a clean miss at 150 yards. For that afternoon I decided to take my ATV down an overgrown wash. The wash was thick with cat claw and other thorny plants. We used to be able to drive down this was and push some out but not today. I also figured that this would be the last time that I drove down this wash without a chainsaw to clean it out a little if I decide to go back.

Tuesday same problems no matter where I hiked to I was seeing very little if anything, and again Roy was getting into them but not being able to hit anything. I asked him if he had sighted in his handgun
since he lost it off of his ATV last year and he said that he hadn’t. So we set up a target at 100 yards just before lunch and he took a shot. Dead center…he was really ticked off now.

Wednesday went along with neither of us getting any shots off or even seeing one. It was as if these little beast has grown wings and had flown away.

Thursday Roy went one way and I went another. I glassed up a couple over towards an old copper mine that was off limits. Roy had headed up into familiar ground and jumped some out of the bottom of a wash. He was off but lost them on the top of the ridge. In the meantime Bob had spotted a lone javelina traveling along the same ridge that Roy was on. He was able to get Roy to head to the north as he watched the javelina. Roy finally spotted it and went to get into position to take a shot but there was a tree in the way. So he moved to the side and as he did so the javelina did also. Now it was quartering away from Roy but Roy had a tree to rest the pistol on to take the shot. It was quickly over Roy had is javelina. I met up for late lunch and then afterwards we tried to find the ones that Roy had missed that morning but couldn’t come up with them.

Friday morning came and I was wondering what I was going to have to do to find one to get a shot off. As we drove up the center wash a herd of 8 or 10 ran right across the road in front of us. I parked my ATV and headed up the hill in pursuit. I topped a small hill and tried to find them only to see them headed over the ridge into an area that we called “The Snake Den” since there is a den or rattlesnakes in it. I got to the top of the hill as fast as I could hoping to find them on the opposite hill or going over the next ridge like they like to do. But nothing, so I figured that they had to be down in the bottom. I started to parallel the bottom up where I could see into the bottom but there was nothing to be seen. Roy came over the hill and was a little down the hill from me so both of us started to parallel it towards the top of the draw. Once we got to the top we had no idea of where they had disappeared to. I hiked over the ridge to the north and Roy went around the top hoping to find them but nothing. So I was now close enough to the snake den that I took a hike over to it but the snakes were deep inside and there was a packrats nest in the opening. It would have to get warmer for them to start moving out and around.

Well, Saturday and Sunday came and went with nothing to report except for a blister that I now have on my heal and a lot of miles covered. I do have to admit that this is a very fun hunt, it is also very aggravating at times but I’ll be back in 50 weeks ready to do it again. 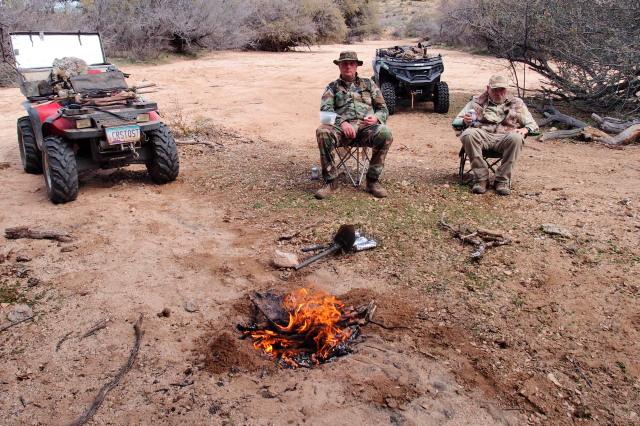 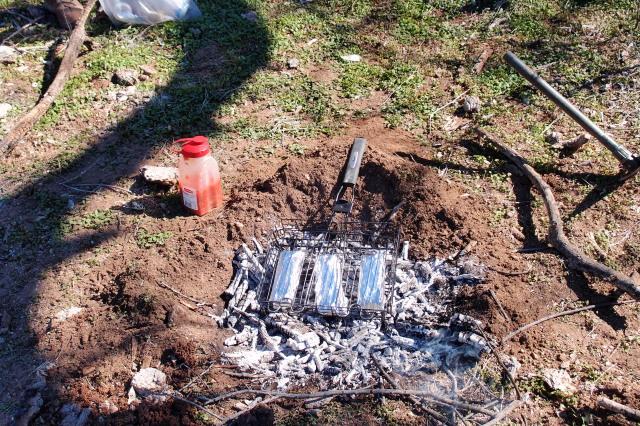 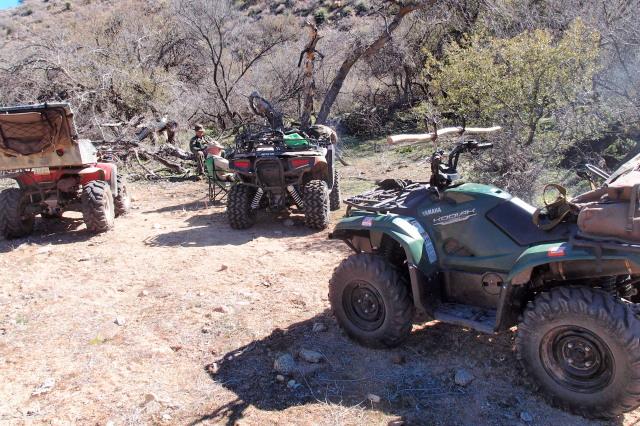 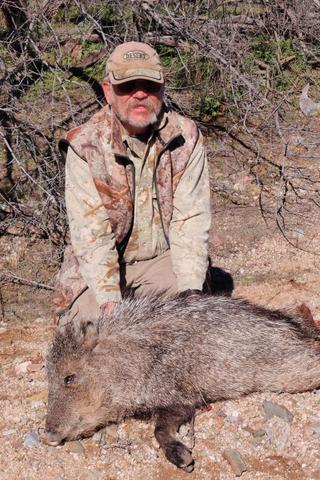 Reactions: Gr8bawana, go_deep, marcusvdk and 3 others

Sounds like a hell of a good time Jim
Reactions: JimP

Looks awesome, congrats on the memories! Like to get my boy down there some year over Christmas break.
Reactions: JimP