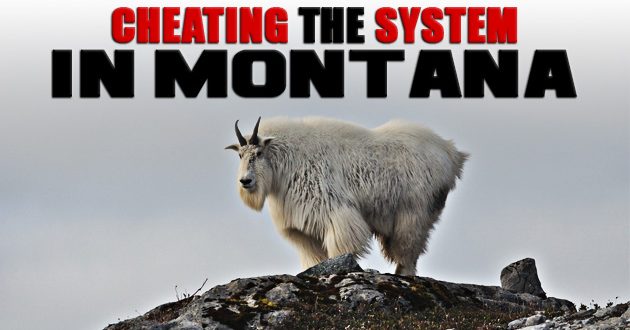 Father/Son duo Larry and Shane Adams from Emo, Ontario Canada have been sentenced to pay $28,295 to

Make sure you all read the comments on the blog, there is lot of opinion on there. What do you all think? Was the fine enough?

I have come to the conclusion that if we or the states wanted to start putting a halt to this kind of activity they are going to have to start putting the offenders into jail for a few years. This might get the poachers or offenders to thinking about what they are doing.

As to being a resident or not it isn't up to us to decide what we are going to go by. All the western states have basically the same law on how to qualify as a resident. It is usually living in the state for a minimum amount of time before you are allowed to purchase a resident license. It doesn't say a thing about owning a home or property as the qualifier to be a resident. As they say, if you don't like the law work to get it changed.

There was a person a couple of years ago that did the same thing in Utah. He was a resident of Arizona and purchased a home in southern Utah and I believe he actually changed his drivers license to Utah as was required by law. He then drew a desert big horn sheep tag as a resident and promptly moved his residence back to Arizona. They nailed him pretty good from what I remember but again, there was no jail time.
Reactions: Colorado Cowboy and AKaviator
A

Residency fraud is, in my opinion, a big problem. Every state I have been to treat their residents different than non-residents, as they should. Alaska treats non-citizens different than non-residents also. You see this in drawing tags, prices, guide requirements, etc. Our state constitution requires that Alaska residents receive priority. I agree with it. I would guess that Montana's constitution does also.

My take on the Montana case is that the Judge in Montana completely failed the legal residents of Montana in his sentencing of the non-resident aliens (assuming they do not have legal dual citizenship). If they are claiming Ontario residency and Canadian citizenship, then they have no legal business claiming Montana residency. The Montana court agreed that they are not residents or the case would have gone no further in the court.

To give retro-active suspension of their licenses is almost unheard of. The fines totaling far less than the value to the resource is a slap in the face to all legal hunters in Montana that pay the money to do it right. I agree with Jim, they should be in jail!
Last edited: Sep 3, 2019
Reactions: Colorado Cowboy and conibear

What's next....nonresidents voting in your state just because they own property and pay some taxes on it.
Reactions: buckbull and AKaviator

Colorado Cowboy said:
What's next....nonresidents voting in your state just because they own property and pay some taxes on it.
Click to expand...

I think we've probably reached the 'non resident' voting in our state/country already...

Claiming residency in states where you don't legally reside (different standards in different states), has been abused for a long, long time. The primary motivation is generally to save on taxes. You may live in New York for 9 months out of the year, but claim Florida as your residence because you spend 3 months at your vacation home. You'll get nailed for tax fraud a lot more than for most game violations.
Reactions: AKaviator

I always look at situations like this and how people have been doing it for so long and think to myself:

I will tell you this much, if you went to Canada and broke their laws like this you would never get into Canada again. EVER.
Last edited: Sep 5, 2019
Reactions: AKaviator

mallardsx2 said:
I always look at situations like this and how people have been doing it for so long and think to myself:

I will tell you this much, if you went to Canada and broke their laws like this you would never get into Canada again. EVER.
Click to expand...

I agree! You’d prob serve a few years up there before they kicked you out indefinitely.

It seems to me for a case like this were the poaching and residency fraud was sustained over a period of several years the fines and punishment were definitely on the light side. Reading some other articles on this case it seems the father and son in this case are fishing guides in Canada. They could have incurred some severe penalties which would have impacted there fishing business.

This reminded me of the Arizona guide a few years back who used residency fraud to draw a Utah Resident Deseret Bighorn tag. The fines were much more severe in that case and I have to wonder is it because there is more cooperation between the US states on these violations? Perhaps a case like this is were the US and other countries need to make a similar law or agreement to have stronger punishments for international violations?

KANAB — A well-known hunting guide won’t be hunting in Utah—or 46 other states—anytime soon. In addition to losing his hunting privileges for the next 10 years, the guide and