I already posted a picture from my buck earlier in the week, but wanted to put up a full story after I got home.

Dad and I got into Douglas Wyoming around 10:00 Saturday after leaving my house at 8:00 Friday, and that's with the two hour time change. After unloading gear and getting something to eat, we headed out to do some scouting. We each had unit 29-1, and would be focusing on the thunder basin national grasslands in the northern end of the unit. We were a little discouraged by the number of goats we were seeing compared to what we saw on private land driving in. But after getting out and doing some walking, things starts to come together a little and left us with a plan for opening day.

First daylight found us where we last saw a buck and a few does the evening before. However a short period of glassing failed to turn up any antelope. We climbed a high point and found a small group with a buck in it. We put together a game plan and in a short distance found out just how good their eyes are. The second stalk had us working a larger group of antelope. I topped out on a ridge and spotted a buck I didn't know was there. I hit the ground and tried to get my dad up front but he insisted I shoot. The sage brush was too high for my bipod so in grabbed my shooting sticks. He was only about 160 yards but I was feeling all the excitement from two years of planning this trip and missed. He ran to the top of a hill and stopped to look back. I calmed myself down and this time at nearly 300 yards I dropped him with my new tikka 7mm-08 my wife had bought for me just a couple months ago. I walked up and laid hands on an antelope for the very first time. 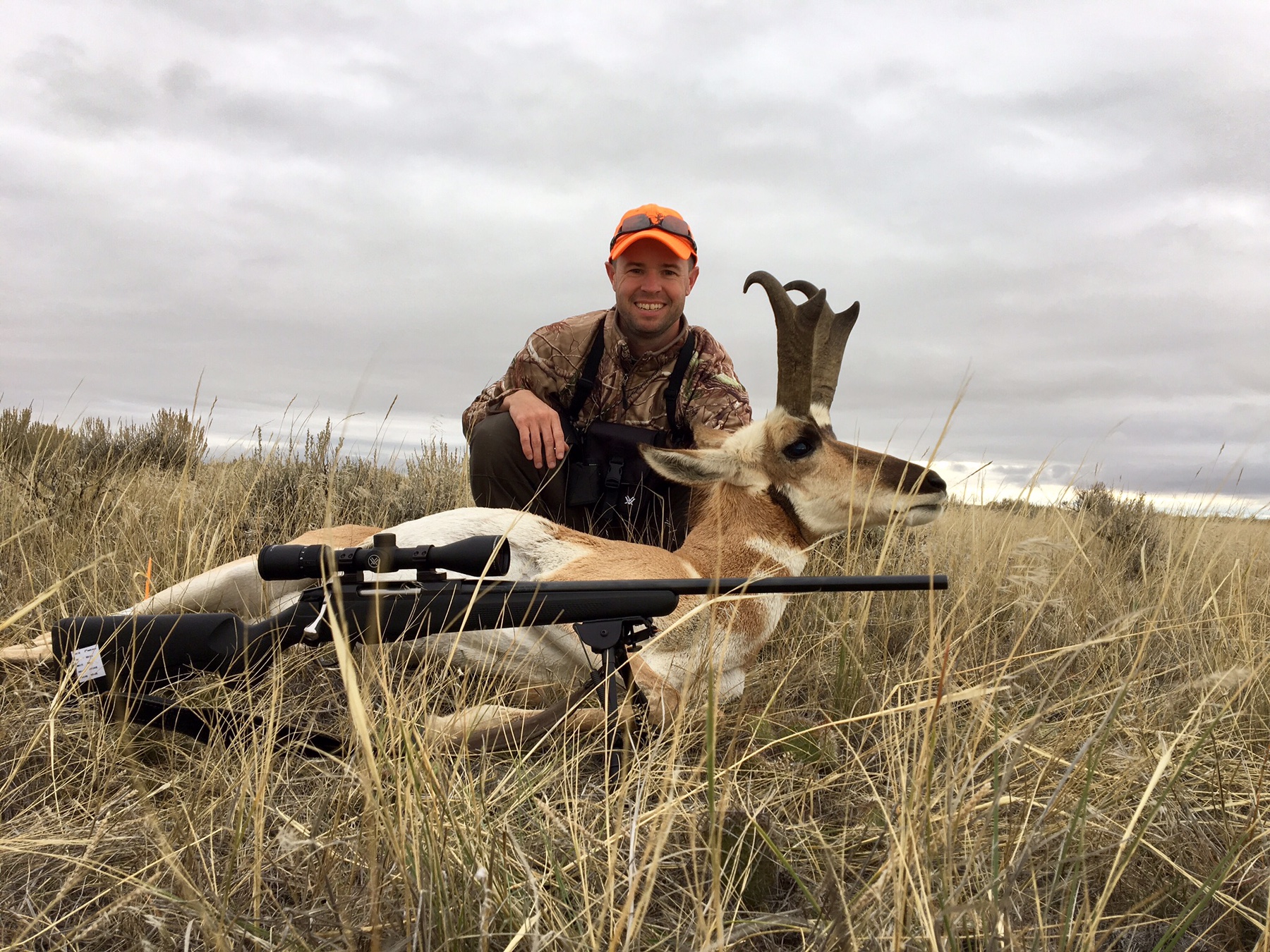 We got on several other groups of antelope that day and dad had a miss but couldn't put it together. We located a group of antelope before dark and put them to bed and had a plan for the next morning. That plan worked perfectly and we almost had this buck in bow range right after daybreak. Not a monster but it was an easy shot and I was able to be right beside dad and watch him drop through the binoculars.

Now on to the does. We each had a doe tag in unit 9. This proved to be a little more difficult which I expected with the amount of tags for that unit. We hit a couple walk ins with no luck. On the third walk in I spotted a group of antelope which turned in to one of the hardest hunts I've ever had. I tracked the stalk on my OnX and it was a 2.19 mile stalk with all the circling and backtracking. I dropped this doe at 279 yards. Since we were further in, I also got my wish to pack an animal out.

The next morning found us on another walk in area. I quickly spotted another group of goats over a miles away. We came up with a plan and got in close but they were on the move. Fortunately my dad is one of the best shots I've ever seen on moving game and he dumped this doe at about 75 yards. We were also close to another road so I walked back and picked dad up on the other side.

The trip couldn't have worked out any better. I got to see 5 animals I had never seen before which included antelope, mule deer, elk, badger, and golden eagles. We came home with a lot of meat and a lot of memories. I can only hope to make the same trip with my kids one day. As far as equipment goes I will say one thing. OnX. It's the American Express of the west. Don't leave home without it.
5

Sent from my iPad using Tapatalk

Congrats on both of your success!


Sent from my iPad using Tapatalk

Looks like you had a great hunt with memories to last a lifetime!

Congrats, and thanks for posting the story! Love reading success stories, and really anything about antelope. I'm getting ate up with it haha.
S

Thanks for the great photos and story. Sure hope to put my hands on one for the first time in a few days.
5

Yell Co AR Hunter said:
Thanks for the great photos and story. Sure hope to put my hands on one for the first time in a few days.
Click to expand...

Good luck. All I can say is go ahead and start planning your next trip because it's addicting.

Great pics, congrats on the success, and good to see you and your dad having some good times together. That's a long ass drive though ha ha.

Congrats. Where in VA are you? I'm in Bristol and just got home from a CO antelope hunt.

Can I share your buck on our social media?
5


Sent from my iPhone using Tapatalk
5

cotim said:
Congrats. Where in VA are you? I'm in Bristol and just got home from a CO antelope hunt.
Click to expand...

Near Harrisonburg, about 4 hours straight up I-81 from Bristol

Nice lopes! looks like you guys had a ton of fun!

What kind of pack is that? looks like it could hold a few of them lol
5

It's a Blacks Creek pack. I got it as a gift about 10 years ago. It zips up pretty compact but has a lot straps that hang loose so it's not real tidy. It can certainly pack more weight than my knees can.


Sent from my iPhone using Tapatalk
Click to expand...