Can?t decide between a sportsman or ranger!

Cost and size are my only concern with the ranger. But I think the benefits are greater. 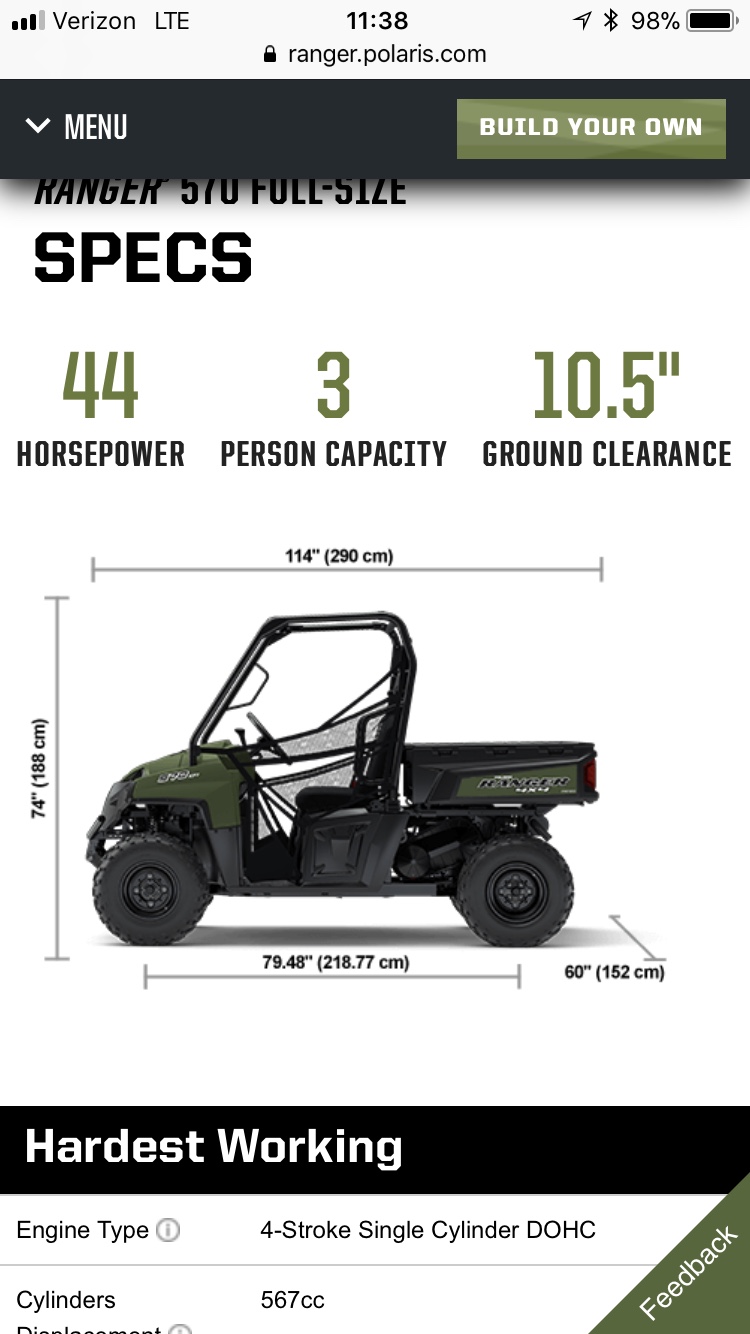 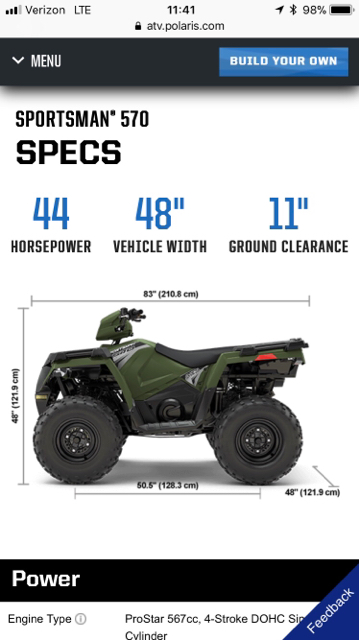 Sent from my iPhone using Tapatalk

Yes a 400 sportsman and loved it

It will all depend on what you plan on doing with them. I am a 4 wheeler type of rider. I go places where it isn't legal to take a side by side because of the width. But if you don't go those type of places then the ranger might be the right machine. One of the pluses of the ranger is that you can bring a friend quite easily and it doesn't disrupt the balance of it where 2 people on the sportsman does.

As said...2 different machines. I've owned both. Had a Polaris Sportsman 500 for 10 years. Very dependable and did a great job. In fact I had 2, one for me & one for the wife. Sold both 2 years ago and bought a used Yamaha Rhino 700, which is a great machine too. I don't have to wear a rain suit and can stay relatively warm & dry. 2 can ride great with a tilt bed for cargo like an elk or deer. My Rhino is 49" wide. Most of the width restrictions around here are that it must be less than 50" wide to go on the restricted trails. 2 disadvantages for me are that it gets a lot less mileage and is noisier than my Sportsman 500.

So it?s will be used in Kansas and Missouri mostly and occasionally heading west if needed. No width restrictions here. A positive would be hauling the kids and wife plus gear.

Have you checked out the Honda Pioneers? I really like mine and I have not broken it yet. (Which is pretty impressive).

mallardsx2 said:
Have you checked out the Honda Pioneers? I really like mine and I have not broken it yet. (Which is pretty impressive).
Click to expand...

I own a 2006 Honda Foreman 500, but bought a new Polaris Ranger in 2015. Places I have been there hasn't been any width restrictions. It has saved my truck from getting beat up. The downfall is like CC said, much noiser than my ATV.

I've lived in Kansas, Arizona, Utah, California, and now Montana and I've ridden several models of Polaris machines in all these states, my current machine is a CanAm Outlander Max XT with the 650 motor.

The reasons I chose this machine were based on my experiences with a Ranger, a General, and an older Polaris 4-wheeler.

Obviously the Outlander is narrower and I can get in to the restricted trails with it.

The side by side machines are more comfortable to some degree but they are easier to handle in bad weather, not withstanding Kansas winds. One of the problems I've already had to solve was how to drive my Outlander in a blizzard without being blinded by the snow and ice. I solved that problem by using a face mask and goggles. As for a side by side being warmer, I'd say that this depends on the circumstances. If you have no doors then I don't think that they are any warmer, with doors it's warmer at first but without a cab heater it will slowly get just as cold as a 4-wheeler but without the wind chill.

A side by side is so large that it tends to get high centered in deep snow, the flat bottom of the machine presses the snow down and causes it to ice over, you end up being high centered on an ice pillar. The only way off that ice pillar is to dig all of the snow out from under the machine. A 4-wheeler can have the same problem but it's a smaller machine and it takes a lot less time to dig it out.

Another issue I have with the side by sides is that they have a far higher center of gravity and they will tip over easier than a 4-wheeler, if the side by side tips over you aren't going to tip it back upright by yourself and while it's difficult to do it to a 4-wheeler, it can still be done.

A 4-wheeler doesn't have the storage space of a side by side but you can overcome that problem with a small trailer or a snow sled, both of which are actually a better solution than the limited bed size of a side by side. Both machines can get more storage space by buying a larger trailer or sled but I can see what I'm towing better on a 4-wheeler so it's easier to check my load from time to time. The side by side's heavier weight would allow you to tow a larger load than the 4-wheeler.

Another advantage of a heavier side by side is that, if you have a winch, you can pull a heavier object but that can be overcome by anchoring either machine to some heavy object.

I went from a Yamaha Grizzly 700 4 wheeler to a Ranger several years ago. We put a ton of miles on them on the ranch and trade every year. I feel safer on side-hills and steep inclines with the Ranger, I'm amazed at where it will go. The little bit wider and longer wheel base make a big difference in my experience. The bed is great too for hauling gear. I use it out west too and like that I can carry self-recovery gear, packs, cooler of food/drinks, and meat if successful in the bed. I seldom use the winch on the front but we got stuck after a 15" snow fall in Wyoming last year and it sure came in handy. Saved lots of shoveling. I carry quite a bit of chain plus tire chains. The tire chains have proved priceless at home when calving in bad weather. The Ranger saves lots of calves on the ranch having a cooler with hot water, milk replacer, colostrum, plus a bottle and tuber always with me when checking them. The power steering and winch are worth the cost.

I use my winch with my blade to move snow.

I use my atvs primarily for ice fishing, and there's no way that a side by side can go where I can go unless it has tracks. If that's not your thing, a side by side is probably your best bet

Colorado Cowboy said:
I use my winch with my blade to move snow.

I also use my 4 wheeler to plow snow but this winter we never did see enough to even fire up the machine. I took the blade off when I went javelina hunting in Arizona and figured that I wouldn't put it back on unless we got more than 4" in one storm.

I used mine the one time that's in the picture. All the rest of the snow was an inch or 2 at the most.

I have the mid-sized Ranger 570. I've taken it out west with my twice antelope hunting, and since my hunt partner has very limited mobility, it was a real asset. I still preferred to hike into the back country for my lopers, but it was a blast getting on rabbits and seeing the country on the Ranger. I do use a trailer to haul the mid-sized, but you can still haul it in the back of a 8' pickup box if you need to; it drives up and over the wheel hubs with no problems. 2.6K miles so far without an issue.
N

I've got 2 sidexsides one 06 rhino 450 carbed and a 2016 Polaris 570 mid crew. The rhino is way way better in the snow and over rough roads. the Polaris is great for touring with friends and family in fact we put 2600+ miles on it in a 2 years with no major issues other then you have to replace the air filter every 20 to 30 hours. bad air filter location. I use my old rhino as my trapping rig and it never lets me down. As for snow use its driving around lots of stuck 4 wheelers to pull them out.

Side by side would be my choice.

I?ve had both and like having the cover over my head to keep the weather and sun off me. The disadvantage is the quad is much more maneuverable and you can definitely get to more places.

I think I?m going for the sxs! The pro?d outweigh the cons (which was few). Should have it next week after working this weekend. Guess that?s what happens when you go to the dealer with your eye on a atv but the versatility of a sxs grabs your eye and wallet! Thanks guys. Will post when I pick it up 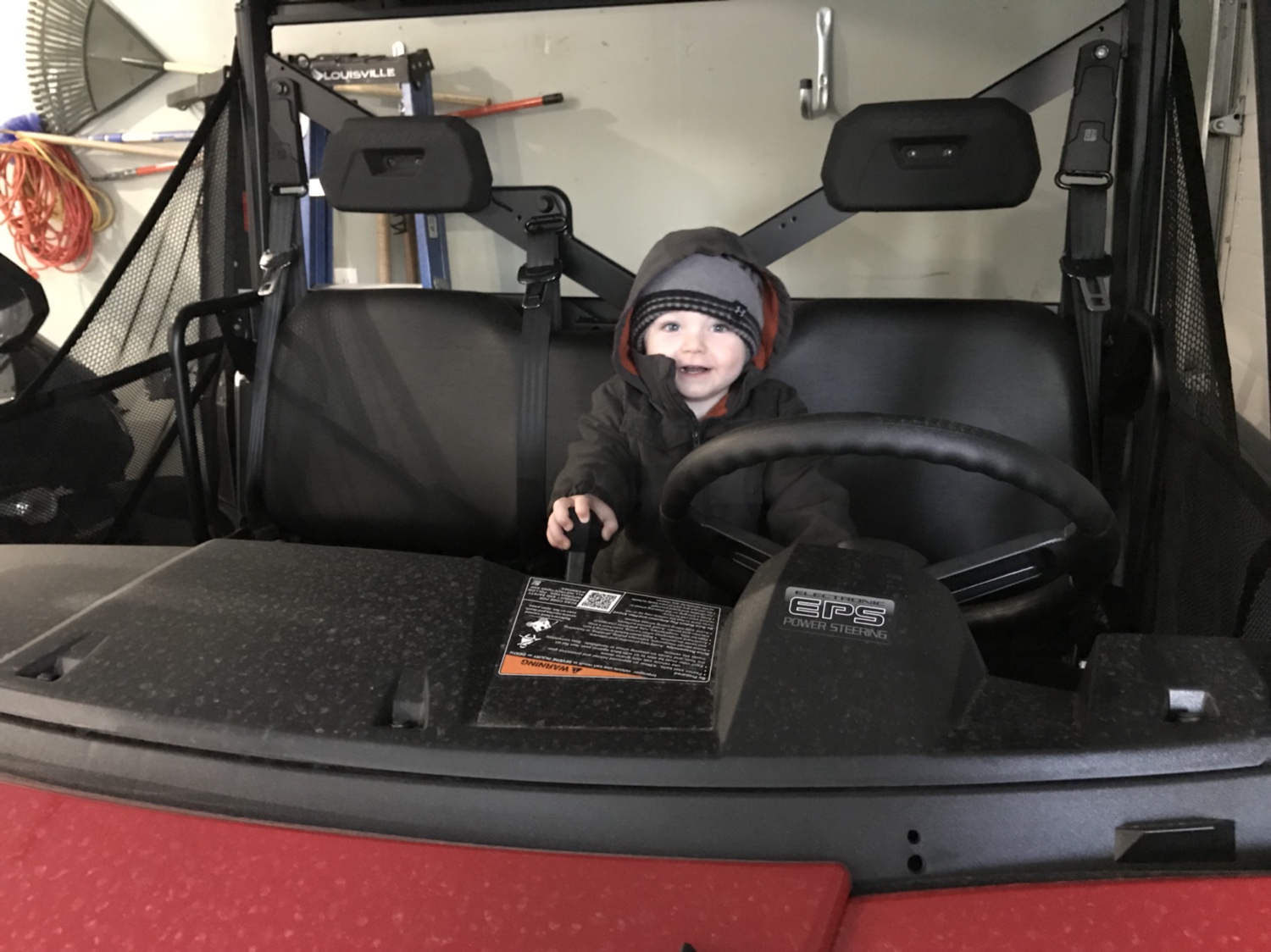 Picked up the Polaris and someone love the sxs too!