Opening The Can Of Worms...Coronavirus...

Will it be a blip on the radar or something that we read about in history books as a major tragedy?

It will just be a side note in history, remembered only for the worldwide panic it caused than the death toll. (Full disclosure: I am neither a Doctor nor a fortune teller). I am 0% concerned about it at the current time.

It will go down as the pandemic that caused the TP manufactures to go into 24/7/365 mode just to keep up with demand.

Other than that who knows? I personally believe that the press is making more of it than they should.

Its obviously scaring the SHIT out of every body with how much TP is being sold
Reactions: bdan68

same can be said of corona virus .
I know plenty who died of heart issues ,cancer , auto accidents, drowning, murdered or even suicide but not a single influenca related death.
why panic before tragedy strikes??????????

boy scouts got it right , be prepared !


I have no doubt most can deal with it if they get a sniffle.

on a side note...…..I wonder how many of those folks who are avoiding crowded areas such as game events or movie theaters or music festivals, decided to go eat in a public restaurant instead???????????????? how many are going to church and hugging half the congregation????? how many will get infected while buying T.P at Walmart ????does anyone enter a Walmart without being exposed to some nasty thang??

no need to fear a tp shortage

you dropped your load
beside the road
and walked away contented!

My odds of dying on the highway in Wyoming or of old age are significantly higher than this. I'm so concerned that i'm looking at booking cheap airline tickets and taking the family on a vacation!

Side note what would happen to this country or world if a really black plague epidemic happened where millions actually died? We raid stores over something so simple, I can't even imagine how bat crap crazy people would get.
Reactions: jmwyoming

Not concerned at all. I think this is a media hyped up and will go away when they can find something else to report on. They got bored after the impeachment went bad for them. All the sudden Pelosi is off the spotlight.
Reactions: bdan68

I posted this on another forum but I will re-post my thoughts here.

Its like this..... The media is controlled by democrats (Mostly Jewish Democrats, but thats beside the point).

Take a look at any election year. You will see that during every election year in the past 30 years there has been some type of scare being pushed by the media agenda.

Now, I AM NOT downplaying the Coronavirus. It is a serious virus. AND I TRULY HOPE THEY FIND A CURE.

HOWEVER, when the media pushes an agenda it is ALWAYS intentional.

So the BIG stock market players (I am talking the filthy rich with connection to all of the media outlets) have moved their money to safe accounts. Then the news comes out we are all going to die...and the stock market crashes.

Now ask yourself. Did they hold their funds in those safe accounts? Or did they re-invest heavily while the stock market is in the toilet.

It would be interesting VERY interesting to see who profits from this in the long run. Intentional? That is for you to decide.

Its not insider trading, but know this, people profit from panic. Especially when their buddy's over at ABC, CBS, NBC, CNN, and MSN, YAHOO News are pushing an agenda to drive the stock markets down.

To me its American Fraud/Scare Tactics at it finest, being manufactured, for the profit of the elitists.

If you dont think that the news medias and the filthy rich are in ca-hoots I urge you to do some research for yourself.....

Conspiracy theory? Maybe....but I dont believe in coincidences. Never have.

We are a nation of sheep being led by wolves on both sides of the isle. When the wolves get hungry, they eat. Yet we still allow them to lead/control because your average American isn't educated enough to understand what is happening.

Cant beat em, join em? Ya right, if your a little guy in a big pond you're OUT. NOT in. So dont even try. The people who are weaponizing this disease and controlling the narratives are so filthy rich that you will never be allowed to be a part of any of it. 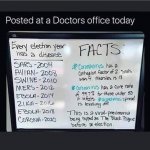 I fear the economic impact more than the Virus. We are dang near shutting down this Country. Just the losses from all the sporting events will play a major role on many cities across this country. Anyone care to estimate what the average sports fan spends on travel, lodging, food, and other entertainment on a tournament trip. This is only a small part of the economic loss.
S

I agree its hipped up , My wife is in the covid-19 unit in South Lake Tahoe as i type they expect this to dye out in the next three weeks. The people of greatest concern are elderly with immune deficiency's. Kids are not effected but are carrier's which is why you may see some school closures ect. Take a few precautions that really should be considered on a daily basis especially if you fit the target criteria. Take care folks!!

I am prepared for the Zombie-Apocolypse, but this got me by the shorts. Sort of reminds me of one of my fathers favorite poems;
"When in trouble,
when in doubt,
run in circles,
scream and shout.

Luckily for my wife and I that we had already figured out that we don't need a "bug-out kit", since we are already there. Only a forest fire will force us out.

Yell Co AR Hunter said:
I fear the economic impact more than the Virus. We are dang near shutting down this Country. Just the losses from all the sporting events will play a major role on many cities across this country. Anyone care to estimate what the average sports fan spends on travel, lodging, food, and other entertainment on a tournament trip. This is only a small part of the economic loss.
Click to expand...

Yes, that is my biggest concern as well.

I'm not sure what to think but I know 30 years ago the majority of the world wouldn't have even know about it.

The fear that this is creating is real. My mom is really worried and is rarely leaving her house. My company has limited travel and we have had to cancel several important business meetings this week. In an airport last week, the overall attitude of everyone was strange and everyone did their best to keep their distance from others.

The only action I am personally taking is watching the stock market to try to figure out when to jump in to take advantage of the plunge.
Y

I would say get back in the market by next week. People are not going to sit still very long unless the health start dying.

I wonder if this whole situation will effect draw odds, the market crashing during application season could have some folks a little hesitant to tie up a few grand on applications.

That could be a small positive result … a "silver lining" kind of benefit.
Reactions: marcusvdk
Y

D_Dubya said:
I wonder if this whole situation will effect draw odds, the market crashing during application season could have some folks a little hesitant to tie up a few grand on applications.
Click to expand...

I doubt that. Most of the hunting community are more of the common sense crowd.
It is the other folk I worry about. The ones making runs on all the toilet paper. I don't know about where you guys are from, but shelves are empty and limits in Arkansas. Much like the ammo a couple years ago. Two major school districts shutting down already. I the SEC basketball tournament canceled. I am sick of this mess.

Of all things to be short on....Like I tell my wife, I need my "bears and clouds"....not the cheap $hit paper. lol