My dad drew a 331 Ruby moose permit this year and I am doing some research for him. I did a little archery elk hunting in the area back in college but I spent most of my time in a small portion of the unit and that has been quite a while ago. I am looking for anything- previous experience hunting in the unit, known locations of moose hangouts, contacts of anyone that has hunted moose in the unit, etc. Any info I can get is much appreciated. Feel free to PM me.
Last edited: Jun 12, 2017
B

The top of the Gravelly's is always good, the moose really come out of the woodwork in early October, and IME, the aspen stands were full of moose that time of year.

Early in the season I would take a serious look at the Robb/Ledford creek area on the public land there. When I worked for Turners, there were also a few big bulls that would move on and off the public surrounding the Snowcrest Ranch. I would also poke around Greenhorn, Willow, Ice, and Cream creeks as well...in particular earlier in the season.

It seemed to me like the moose moved "up" into the Gravely range to rut come October.

I did see some great bulls down there, 3 or 4 no question B&C bulls.

I know that things have changed since I last spent any significant time there.

Here's a bull I saw on Turners, the smallest of 3 bulls I saw that summer...the best of the 3 bulls was among the best Shiras I have seen (never had my camera when I bumped into him throughout the summer). They spent about half their time on private and half on public...I never saw any moose hunters on the public. 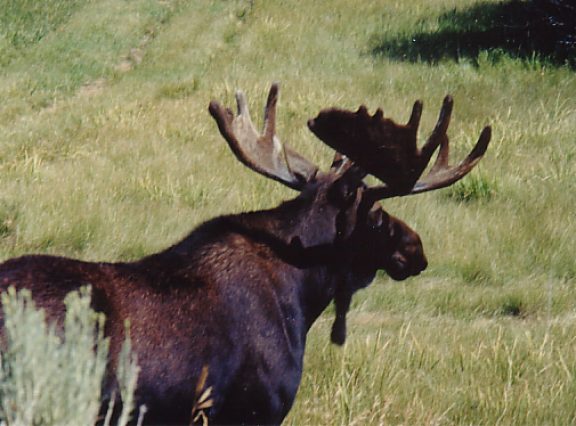 Good luck...you should have fun.
B