Game is simple, show a picture of the entry wound. List what bullet made it...

Antelope shot at 417 yards. .257 Wby, bullet was a 100 gr Nosler Ballistic Tip. My own reloads, chronographed at 3500 fps. Destroyed a complete front shoulder .

I am not a big fan of this bullet (I do shoot and love Nosler Partition bullets), but 100 were given to me so I loaded them up. They grouped really well, less than moa. I am using the rest for predators.

7mm Mag shooting SST's. That's the last animal that I shot with SST's. Also a Nosler Partition fan, which I've shot for 20+ years aside from this one small stint with a different bullet. I will say that this bullet did do a great job on a few bucks, but when it hit bone, it seemed to explode.

shoot, I wish I would've taken pics of that. just a pic of entry wound that just happened to be in the pic. exit wound was size of penny, punched shoulder and exited through heart and ribs.

Entrance
Deer was about 40 yds, quartering away, shot entered just behind front leg at a pretty steep downward angle (shot from high tree stand). He ran hard for about 50yds and dropped. The blood trail was impressive to say the least.
Exit wound was in lower front chest about 1-1.25 inch diameter hole. The top of the heart and most of the major vessels there were destroyed. (I did manage to save the very bottom of the heart.
Exit wound pics

Based upon the large wound channel and some small lead fragments adjacent, I suspect some or most of the front half of the bullet stayed in and the base of the partition exited.
Good old partition, tough to beat. I shoot this same load for elk with similar results.
Last edited: Aug 14, 2016
E

The buck ran just out of sight in the thick northern forest, but he wasn't tough to find. Here are a few pics of the blood trail.

300 wsm, 180 grain nosler partition, 2880 fps muzzle velocity, (chronographed reload)
I shot this buck at about 35 yds, he was facing directly towards me. We met head on while sneaking down the same deer trail to/from from a bedding area. I was fortunate to see his movement first and was just squeezing the trigger when he spotted me and stopped. The impact lifted his front legs right off the ground, he seemed to rear back on his hind legs and flipped over completely backwards! Wow! I've never shot anything and had it go down like that. I guess thats what absorbing over 3000 ft/lbs of energy will do! He stayed right where he landed. Bang, Flop, Dead!

I circled the entrance wound in Black. There was no exit wound.

The Blue circle is where I found the bullet while skinning. It was up against the hide along the front of the rear quarter. It had traveled through the full length of the body cavity. The bullet shed the entire front half in route and I found only the fully intact mushroomed base. There was no damage to any of the quarters, but I did have to discard some neck/brisket meat. I kept the bullet,(its around here somewhere) I'll attach a pic of it when I find it.

This is the one from my deer last year. Shot him with 7-08 using the 150gr ABLR at 315 yds. He hopped in the air when hit and crashed into the trees about 30 yds. The exit hole was approximately the size of a quarter.

I don't have the pics but I shoot a 7mm Rem Mag and deer drop like a sack of bricks. Not a big exit wound unless it hits bone. Once it exited through the shoulder and totally ruined it. I shot one buck through the neck and the exit wound was the size of my palm.

I am going to bump this one up. Mostly because I know many of you have made new exit wounds this fall...

Crazy how you got them together like that for a one shot double kill.

Quartering towards at about 305 yards, 6.5 Creedmoor with 143gr Hornady ELD-X.

They group great in my gun. 1/2-3/4 MOA, I've taken them out to 800 yards on steel and they're consistently impressive. 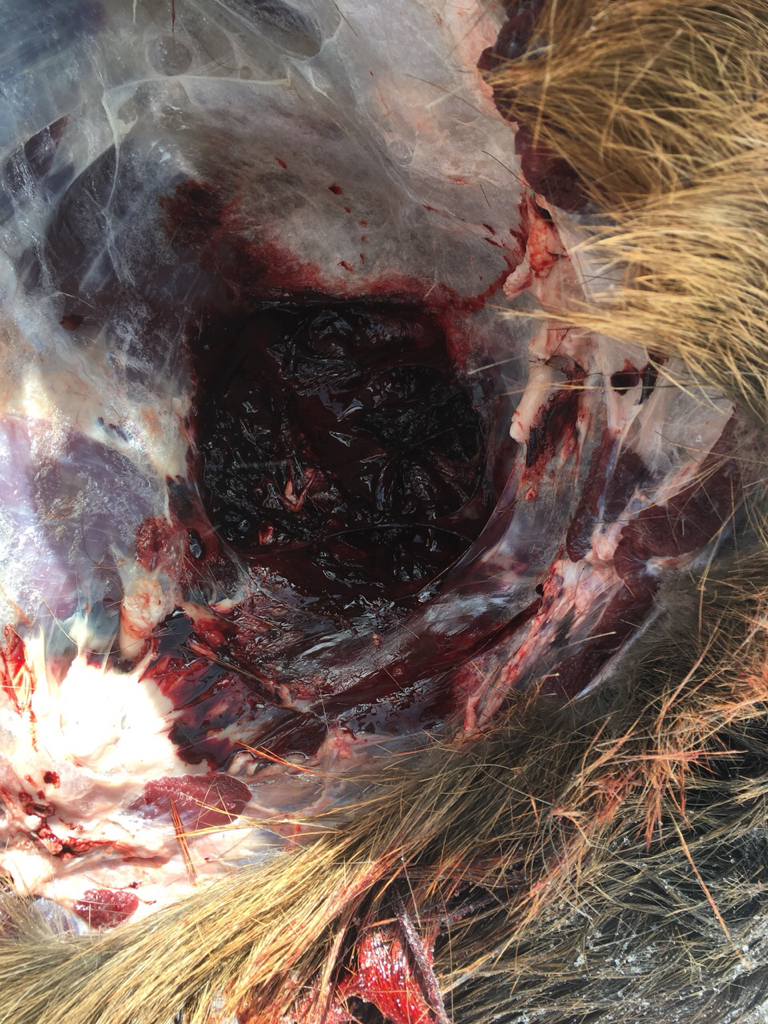 What are your shooting that out of? Was looking at that bullet for my 300wsm but I don't think I have the twist to spin it

zpooch said:
What are your shooting that out of? Was looking at that bullet for my 300wsm but I don't think I have the twist to spin it
Click to expand...