Well since the caribou hunt went to shit we decided to head north. I noticed on IG that some of the big time outfitters had openings and was hoping they still had some. Well they did. I called Mr Rob at Ranchland and his repsonse was " how soon do you wanna come"

Good friend from Texas drove up and within 48 hours we left. ( after I made him some moose burgers and dove poppers).

We also had the great time of meeting Winchester from here on EF as he came over the day before we left for some dove poppers. Great dude.

Got through with no issues. Had the ArriveCAN app fillied out on the phones, PCR test done within 72 hours, passports and shot cards. Easy peasy. Gentlemen said welcome and have fun shooting our " superior " animals.

Saw a fair amount of big ducks and small ducks in the potholes. Stayed the night in Medicine Hat Alberta and had some refreshments and food at the Medicine Hat Brewery. Top notch. Getting back on the road this am for 6 more hours of driving to Elk Point Alberta.

Thought Id keep track of the trip here for others researching the same thing. More to come later today.

Thanks for having me over! The Dove Poppers were awesome and so were your family and friends!! Best of luck on your hunt


Nice job Todd and Team!. Love that you captured the laughter , oh yeahs and whoops post shot.
On another note holy crap is Mackinaw good in the fast water. Wow.
Reactions: THelms 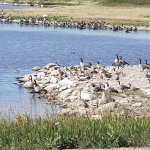 Couple King Canvasbacks mixed in. Better pics tonight. My son has the spotter and phone scope. 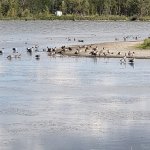 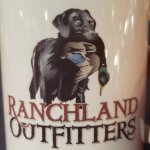 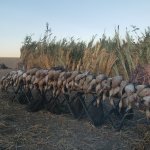 
Nice job Todd and Team!. Love that you captured the laughter , oh yeahs and whoops post shot.
On another note holy crap is Mackinaw good in the fast water. Wow.
Click to expand...

Thanks man, glad you liked it and appreciate Mack's abilities. Excited for you and your trip! Looks like a riot!
Reactions: Slugz

For sure. What really amazes me is that they are mostly hens. Looks like a few drakes that arn't fully colored yet.
Reactions: THelms and Slugz

Colorado Cowboy said:
For sure. What really amazes me is that they are mostly hens. Looks like a few drakes that arn't fully colored yet.
Click to expand...

All are brown up here right now.
Reactions: THelms and Colorado Cowboy

Thats the most pinnies I ever seen stacked up. lol
Reactions: THelms and Colorado Cowboy

Little slower hunt this am but still a great time shooting ducks and geese in the same field of decoys.

Reactions: gonhunting247, THelms, Winchester and 2 others

Another from last night.

Reactions: THelms, Hilltop, Winchester and 2 others

Think you killed more sprig than we would have killed over a 5 year period considering we are only allowed 1 per day. And they are our #1 duck. Good shooting, getting jealous.
Reactions: Slugz and THelms

Pm hunt tonight produced 20 geese and 12 ducks. Had a great time.
Its funny the guides consider any hunt thats not a limit "not successful"
Reactions: gonhunting247, THelms and Winchester